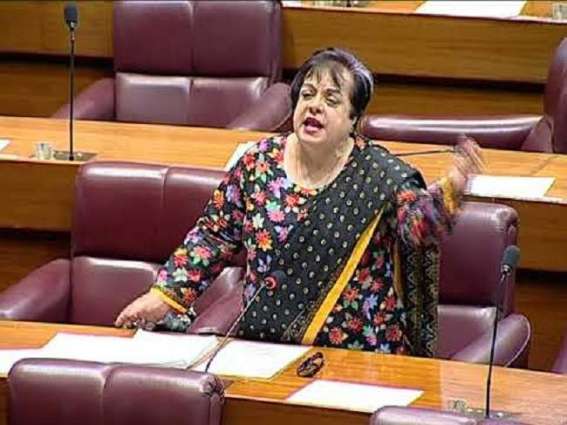 ISLAMABAD: The Senate was informed today that a holistic approach will be adopted to provide full legal and humanitarian assistance to the Pakistani prisoners languishing in foreign jails.
Minister for Human Rights Shireen Mazari told the house during question hour today that consular services of our missions abroad will be upgraded for this purpose. She said a policy decision will also be taken to get in touch with different countries for repatriation of Pakistani prisoners.
The Minister for Human Rights said the present government will bolster efforts to produce skilled workforce keeping in the view the demand of jobs in the gulf and other countries.
Adviser on Parliamentary Affairs Babar Awan told the house that Gwadar port is a big national asset. He said currently limited exports and commercial imports are taking place from the port.
In a written reply, Foreign Minister Shah Mehmoud Qureshi told the house that safeguarding national security, promoting Pakistan’s economic interests and strengthening international partnerships have been some of the overarching themes of country’s foreign policy.
He said the foreign policy as in any other democratic country is formulated by the government. He, however, said the parliament, security agencies and some other ministries play an equally important role in providing crucial inputs. This practice, he said, is also followed in other countries as well.
The Senate today passed a resolution urging the government to immediately enact legislation to criminalize enforced disappearances. The resolution was moved by Mian Raza Rabbani of PPP.
The resolution also asked the government to join the international campaign to end enforced disappearances by ratifying the international convention on protection of all persons against enforced disappearances.
The resolution expressed solidarity with the families of missing persons and those who are victims of enforced disappearances. It assured the families of disappeared persons that the upper house will be their voice in ensuring justice, recovery and punishment to the perpetrators.
The chair also admitted for discussion an adjournment motion regarding alleged rigging in the general elections. It was moved by Muhammad Javed Abbassi.
Responding to the points of Mian Raza Rabbani regarding National Finance Commission Award, Leader of the House Shibli Faraz said that the government desires early announcement of new National Finance Commission award as it has already faced delay.
He said that the finance minister himself has stated that the new NFC is priority of the government.
On a point of order Sherry Rehman of PPP regretted that the parliament and relevant stakeholders have not been taken on board and consulted regarding the decision to form a new regulatory body replacing PEMRA and the Press Council of Pakistan.
Leader of the House Shibli Faraz said the PTI government believes in transparency and everything will be done in accordance with the law and constitution.