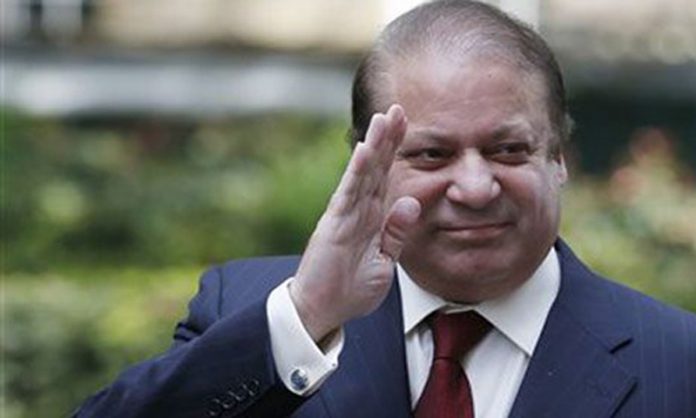 LONDON: Prime Minister Muhammad Nawaz Sharif has said that Pakistan’s economic indicators were positive and the country was on the path of progress.
“Country’s economy is in the right direction and both domestic and foreign investment was pouring into Pakistan,” the Prime Minister told the media person here after his arrival from Switzerland where he attended the World Economic Forum in Davos.
The Prime Minister said that his Davos visit was very successful where he met with various business and the world leaders. He said they all were appreciative of Pakistan’s liberal economic policy and business friendly environment.
The Prime Minister said during his stay in Switzerland he highlighted Pakistan’s economic strength in an effective manner and presented the country as a secure investment destination.
Highlighting his government’s achievements, he said Pakistan’s stock market had achieved first position in Asia while it had become 5th in the world, adding Pakistan hoped to cross five percent GDP growth in coming fiscal year as the government was focusing on all crucial sector of economy.
Sharif said $55 billion were being invested in the country under the China Pakistan Economic Corridor, adding that this gigantic corridor project would not only benefit Pakistan but it was a game changer for the entire region.
To a question, the Prime Minister said negative politics and creating hurdles in the way of development was not in the interest of Pakistan. “We all, particularly the politicians should be united to make the country strong and prosperous,” he added.
The Prime Minister said there was a significant decrease in loadshedding and it would be a thing of the past very soon.
Prime Minister Nawaz Sharif said that terrorism in the country had been curtailed.
To a question about Panama Leaks scandal, the Prime Minister said the matter was in the Supreme Court and any comment on it was inappropriate.
The Prime Minister condemned attack on PML-N UK President Zubair Gul and said Gul was an asset, who worked hard for the PML-N. He said the law would take its course in this regard. – APP