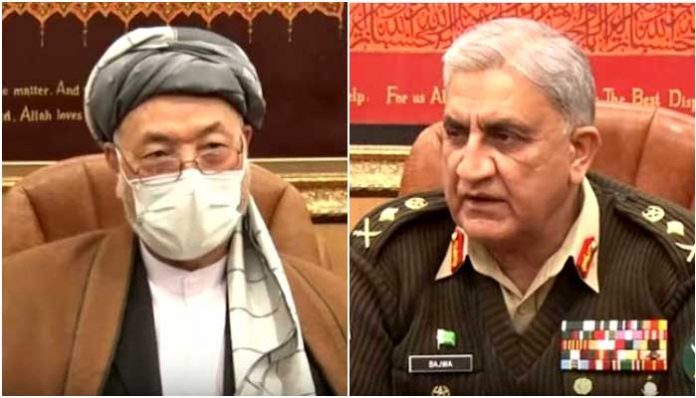 Chief of Army Staff Gen Qamar Javed Bajwa on Tuesday said that “peace in Afghanistan means peace in Pakistan”, according to a statement by Inter-Services Public Relations.

His remarks came during a meeting with Chairman Hizb-e-Wahadat Islami Afghanistan and former Chairman Afghan High Peace Council, Mohammad Karim Khalili, who called on the army chief at the General Headquarters in Rawalpindi today, said the ISPR.

During the meeting, “matters of mutual interest, peace and stability in the region, connectivity and current developments in Afghan peace process were discussed”, according to the ISPR statement.

The army chief said that “a stable and prosperous Afghanistan at peace with itself and its neighbors is in Pakistan’s national interest”. The visiting dignitary appreciated the positive role played by Pakistan and the army chief’s vision on future of Pak-Afghan relations.

An Afghan delegation, led by Muhammad Karim Khalili, arrived in the country on Monday for a two-day visit during which it is scheduled to meet Prime Minister Imran Khan and National Assembly Speaker Asad Qaiser as well.