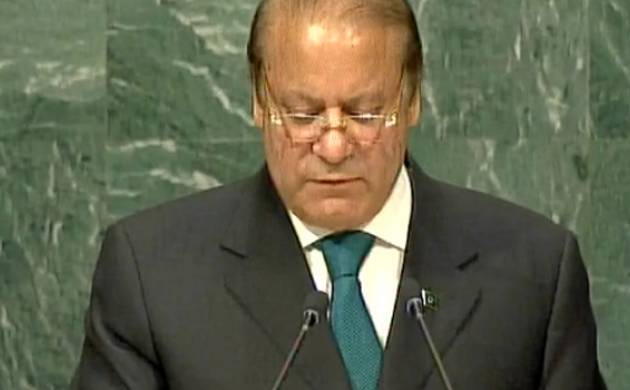 NEW YORK: Prime Minister Muhammad Nawaz Sharif has urged the United Nations to send a fact finding mission to Occupied Kashmir to know the ground realities of brutal killings of the innocent Kashmiris by the Indian forces.
Addressing the United Nations General Assembly a short while ago, Nawaz Sharif said he, on behalf of the Kashmiris and the Pakistani nation, would demand an independent inquiry into the killing of the Kashmiris by the Indian forces.
Muhammad Nawaz Sharif said peace between Pakistan and India cannot be possible without resolving the Kashmir dispute.
He said Pakistan wants dialogue with India to resolve the Kashmir dispute, but categorically stated that dialogue is not a favor to Pakistan, but in the interest of both the countries.
He said India always set unacceptable preconditions for talks, which hampered the process every time.
Prime Minister said that Burhan Wani, a leader of Hizbul Mujahideen whose death at the hands of Indian army sparked a new wave of protests in the last couple of months, emerged as a new icon in the freedom movement of Kashmir. “Pakistan fully supports Kashmiris’ right to self-determination,” he said, demanding the United Nations to play its role in ending the Indian occupation of Kashmir.
“Peace between India and Pakistan cannot be achieved without resolution to the Kashmir dispute”, he said, demanding an independent inquiry into the extrajudicial killings in Kashmir and an end to the curfew.