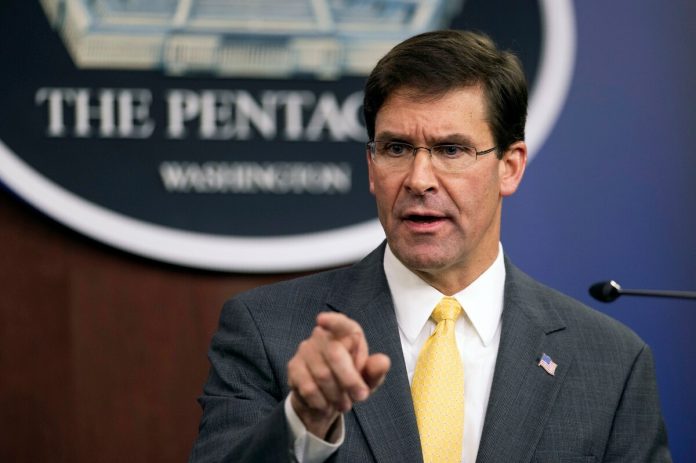 WASHINGTON: US Defense Secretary Mark Esper said Wednesday he was against using active duty troops to quell the protests for racial justice gripping the United States — breaking with President Donald Trump s recent threat to deploy the military to restore order.
Tens of thousands of demonstrators had defied night-time curfews in several US cities going into a ninth day of unrest to voice anger over the death of George Floyd, an unarmed, handcuffed black man killed by a white police officer last week in Minnesota.
But the demonstrations were largely peaceful and while there were tense standoffs with law enforcement the protests did not feature the looting or clashes with police of previous days.
Trump has raised the possibility of invoking the rarely used Insurrection Act to deploy active duty soldiers against protesters but his Pentagon chief came out firmly against the move on Wednesday.
“I ve always believed and continue to believe that the National Guard is best suited for performing domestic support to civil authorities in these situations in support of local law enforcement,” Esper said at a briefing.
“The option to use active duty forces in a law enforcement role should only be used as a matter of last resort and only in the most urgent and dire of situations,” he said. “We are not in one of those situations now.
“I do not support invoking the Insurrection Act.”
Trump denied media reports that he was rushed for his safety to the White House bunker while protests raged in the streets outside.
“It was a false report,” Trump told Fox News radio, before saying that he did go into the secure area for an “inspection” and only for a “tiny, little, short period of time.”
According to The New York Times, Secret Service bodyguards took Trump into the bunker on Friday night and Fox News said he was also taken into the bunker on Sunday.
Reports of Trump taking shelter sparked a wave of online mockery, which is believed to have contributed to his decision on Monday to make a controversial walk across Lafayette Park — just outside the White House grounds — to visit the partly damaged church of St. John s.
Police violently dispersed mostly peaceful crowds of protesters to clear a path for Trump, and Esper on Wednesday sought to distance himself from his appearance at the photo opportunity.
“I do everything I can to stay apolitical,” he said. “My aim is to keep the department out of politics.”
The photo op was loudly condemned by religious leaders, the president s political rivals, and onlookers around the country.
National Guard troops have been heavily involved in controlling the unrest in several US cities and Trump threatened on Wednesday to send them to New York City if the authorities there “don t get their act together.”
“They re violent people in many places,” Trump said, “a lot of bad people.”
He credited using the National Guard in Washington with making it “one of the safest places on Earth.”
“You have to have dominant force,” he said. “We need law and order.” …Agencies