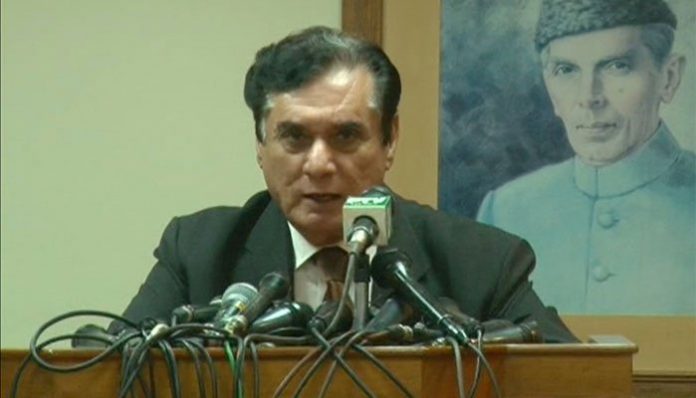 ISLAMABAD: National Accountability Bureau (NAB) Chairman Justice (retd) Javed Iqbal on Tuesday said that “no deals, NRO or leeway” will be offered to anyone, making it clear that people facing corruption charges will have to face the consequences for their actions.
Addressing a ceremony in Islamabad, Iqbal said the anti-graft body was working as per the law and Constitution and it does believe in any political victimisation.
“1,270 references involving an amount of Rs940 billion are currently pending before the accountability courts across the country,” Iqbal said.
He continued, “The bureau will take action wherever there is corruption and act against the perpetrators. Any power, influence or threats end at the bureau’s gate and no one is allowed to enter its premises.”
He reiterated that the bureau’s work will go on as it has been going on and the caravan will keep on continuing irrespective of what people say.
“A corruption-free Pakistan is NAB’s mission. No matter what is said, NAB will not back off,” he said, adding that the anti-corruption watchdog will keep on pursuing the cases that are with NAB.
In a jibe towards the criticism that NAB is pursuing one-sided cases, Iqbal said the bureau will now pursue those cases which will end such views.
He added that the allegation was incorrect as it was their job to look into cases of those who have been in power for the last 30 to 35 years, but added that now “it will have to look into cases of those people who have been in power for the last 12 months.”
“People say that NAB hasn’t done anything in the Peshawar BRT case but it is because the Supreme Court had barred it,” he said. He added that this is why NAB was not taking any action in the case and is trying to get the restriction removed.
He added that NAB neither has any friends nor does it have any enemies, and works under the Constitution and the law. He added that those who have not read the laws of NAB also criticise it.