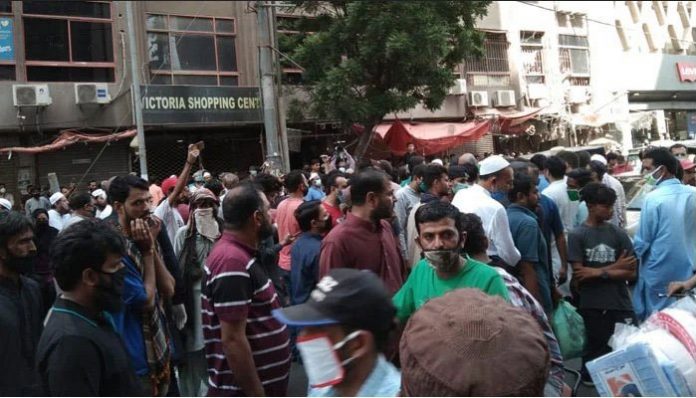 ISLAMABAD: The recent hike in the prices of petroleum products by the PTI-led government has earned the ire of the people as they fear the decision would cause a surge in inflation across the country. According to a report, people from different walks of life condemned the fresh hike in fuel prices and demanded the government revoke them as it would create unrest across Pakistan.

All Pakistan Traders Association (Punjab) President Shirjeel Mir and All Pakistan Clerks Association (APCA) President Haji Muhammad Irshad have announced a “Long March” towards the Parliament House after 12th Rabi-ul-Awal to protest the surge in prices of petroleum products.

Goods transporters have also announced a strike against POL prices in the country. All trade unions have invited public and Opposition parties to take to the streets after the 12th Rabi-ul-Awal.

Punjab Bar Council (PBC) Vice Chairman Farhan Shahzad has condemned the PTI government and urged it to provide relief to the public otherwise the situation will move towards anarchy.

“If the PTI government wants to stay, it should mend its policies otherwise this system would collapse anytime,” he warned.

The PTI government once again increased petrol prices by Rs10.49 per litre and that of high speed diesel (HSD) by Rs12.44 per litre. The new price of petrol is Rs137.79 per litre while high-speed diesel at Rs134.48 per litre.

The prices of kerosene and light diesel oil (LDO) were increased by Rs10.95 and Rs8.84 per litre respectively. The new price of kerosene oil is Rs110.25 per litre and that of LDO is Rs108.35 per litre.

All Pakistan Clerks Association (APCA) President Haji Muhammad Irshad said he would start “a revolution” against the present government from Wednesday, April 20.

He said government employees from all four provinces would reach Islamabad for a long march towards the Parliament House. He said that the increasing POL prices, inflation, unemployment, and deteriorating law and order situation have broken the back of the common man.

“I am inviting the common public and all Opposition parties to participate in the long march,” he said.

In fact, the transporters, traders, and the general public sharply reacted to fresh increase in fuel prices. Wagon owners and drivers protested in the twin cities while public transport operators of the Rawalpindi division would be meeting at the Pirwadhai bus terminal to discuss the situation.

The general public and different political parties have established hunger strike camps in different localities of the city and cantonment board against POL prices and ever-increasing inflation on Saturday.

Pakistan Oil Tankers Association and All Pakistan Truck and Trailer Association also rejected the hike in prices of petroleum products.

Muttahida Naanbais Welfare Association (MNWA) President Shafiq Qureshi has announced a strike against the fresh hike in POL prices. He said all trade unions would take to the streets after the 12th Rabi-ul -Awal.