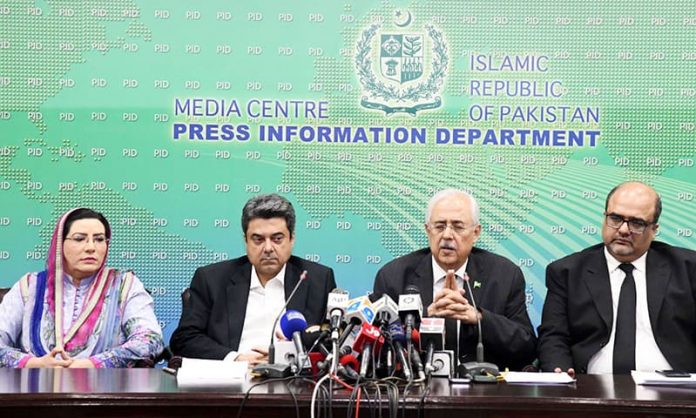 ISLAMABAD: A plea on Thursday has been filed against those who organized press conference following the announcement of high treason case verdict by special court against former president and top military official Pervez Musharraf.
According to details, Special Assistant to the Prime Minister on Information and Broadcasting Dr Firdous Ashiq Awan, Law Minister Farogh Naseem, Attorney General Anwar Mansoor Khan and others have been nominated in the petition while media channels have also been made party for further proceedings.
The plaintiff stated that these representatives have carried out contempt of court by insulting the decision of treason case against the ex-president. The claimant demanded the authorities to launch action against the mentioned names under Article 204 of the Constitution and disqualify them from their public offices.
As per law, no one has right to scandalize any judge. The government leaders have attacked the freedom of judiciary with their pressers, the plea added.
The petitioner further stated that supporting a proclaimed offender comes under violation of law.
Earlier on December 17, special court in Islamabad had sentenced former president and top military official Pervez Musharraf to death in high treason case.
Justice Nazar Akbar opposed the verdict of sentencing Pervez Musharraf to death and cleared him of the accusations while Justice Waqar Seth and Justice Shahid Karim handed him the death penalty.
“We are of the considered view that the accused in this High Treason case has been afforded more than his due share of fair trial. The protected trial of a constitutional and not any ordinary offence that began six years ago in 2013, has yet to see its end in 2019. The accused, who has been given every opportunity to defend himself, has by his conduct in the proceedings only evinced his utter contempt for the law and legal institutions in this country. The facts of this case are well documented. The documents clearly demonstrate the guilt on the part of the accused. It proves beyond a shadow of reasonable doubt all the charges of High Treason leveled against accused by the State.
“It is patent by the act and conduct of the accused facing trial, that he has persistently and stubbornly strived ever since the commencement of this trial, to delay, retract and in fact evade it. It has been his plea throughout that either on account of ill health or for security hazards he could not reach up to this Court to face trial.
“As a necessary corollary to what has been observed we find the accused guilty as per charge. The convict be therefore hanged by his neck till he dies on each count as per charge.
“We direct the Law Enforcement Agencies to strive their level best to apprehend the fugitive/convict and to ensure that the punishment is inflicted as per law and if found dead, his corpse be dragged to the D-Chowk, Islamabad, Pakistan and be hanged for 03 days.”