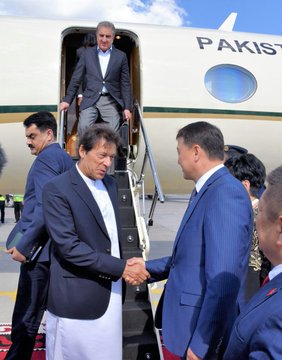 BISHKEK: Prime Minister Imran Khan have arrived in Bishkek, Kyrgyzstan, for attending the 19th meeting of the Council of the Heads of State of the SCO.
The prime minister was received by Mukhammedkalyi Abylgaziev, Prime Minister of Kyrgyzstan and Kyrgyz Minister for Health Kosmosbek Sarievich Cholponbaev.
Foreign Minister Shah Mehmood Qureshi and Special Assistant to PM on Youth Affairs Muhammad Usman Dar are accompanying the Prime Minister.
The Prime Minister will have bilateral interaction with other participating Leaders on the sidelines.