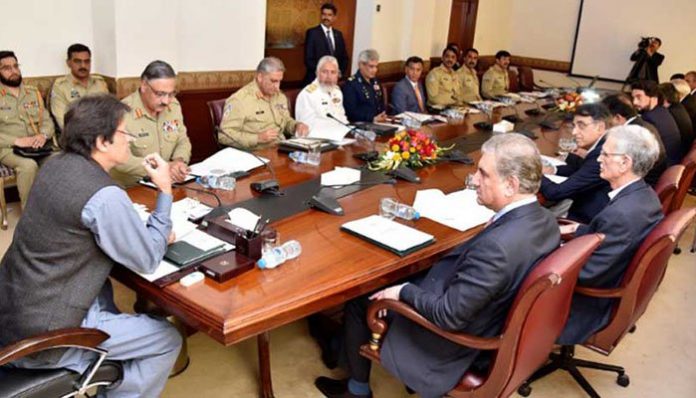 ISLAMABAD: Prime Minister Imran Khan Thursday directed Pakistan Army to respond “decisively and comprehensively” to any aggression or misadventure by India.
The prime minister issued the directives during a meeting of the National Security Committee, which discussed geo-strategic and national security environment, and situation arising after the Pulwama incident.
The forum noted that the state of Pakistan is not involved in any way, means or form in the said incident, said a statement issued after the meeting, adding, “The incident was conceived, planned and executed indigenously.”
It said Pakistan has sincerely offered investigation of the incident as well as the offer for a dialogue on the issue of terrorism among other disputed issues.
“We expect India to positively respond to the offers. Based on the investigation or any tangible evidence provided, the State of Pakistan shall take action against anyone found using our soil,” the statement read.
“However, India also needs deep introspection to realize that why people of IOK have lost fear of death. The violence by Indian forces in IOK is highly counterproductive. The global community needs to play its part in resolving the long pending Kashmir issue in accordance with UN resolutions and aspirations of the Kashmiris.”
The prime minister said that this is a new Pakistan and “we are determined to demonstrate to our people that the State is capable of protecting them and believes that monopoly of violence stays with State”.
“This will not come with commitment alone. We recognize that terrorism and extremism are the top issues in the region and the whole region, including Pakistan has suffered,” Khan said.
“Pakistan alone has endured over 70,000 casualties in the process besides heavy loss to national exchequer. That is why the National Action Plan conceived and issued in 2014, outlined concrete sequenced measures with consensus of all political parties and institutions of Pakistan. Having addressed direct threat to the State of Pakistan, we need to move to ensure that militancy and extremism are routed from the society and the State never becomes hostage to extremists.”
In this regard, the prime minister directed both the Ministry of Interior and security institutions to immediately accelerate actions on ground.
At the same time, the statement read, Khan authorised armed forces of Pakistan to “respond decisively and comprehensively to any aggression or misadventure by India.”
Prior to the NSC meeting, PM Khan also held a meeting with Army Chief General Qamar Javed Bajwa. Sources said the two figures discussed the country and region’s security situation at the meeting.
The directives by the Pakistan premier come at a time of heightened tensions between the two nuclear-armed neighbours over February 14 attack in Pulwama district of Indian-occupied Kashmir (IoK).
Some 44 Indian paramilitary personnel were killed when an explosives-packed van rammed into a convoy transporting 2,500 security forces in the district, in the deadliest attack in the valley in 30 years.
The attack followed New Delhi’s blaming of Islamabad for the incident, which was strongly denied by the Pakistani leadership.
Earlier this week, PM Khan responded to Indian rhetoric with an offer to investigate the Pulwama attack and act if New Delhi shared “actionable intelligence with Pakistan.”
Khan, however, made it clear that if the Indian side thought they would attack Pakistan, then Pakistan would not just think but retaliate.