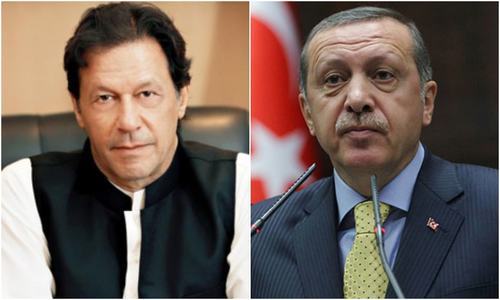 ISLAMABAD: Prime Minister Imran Khan telephoned Turkish President Recep Tayyip Erdogan on Friday and exchanged views on the latest situation of the region.
PM Imran Khan told President Erdogan that the Pakistani nation is eagerly waiting to warmly welcome him during his upcoming visit to Pakistan.
The premier assured Erdogan of Pakistan’s firm support to its ally Turkey. During his telephonic conversation, PM Khan told Erdogan that Islamabad is fully aware of Ankara’s concerns over the matter of terrorism.
He reiterated that Pakistan has rendered 70,000 sacrifices in war against terrorism, whereas, the country has also given shelter to three million refugees.
PM Khan further said that he is praying for the success of Turkey’s efforts for establishing peace and harmony in the region.
It may be noted here that Turkish President Recep Tayyip Erdogan will pay a two-day visit to Pakistan commencing from October 23, diplomatic sources said yesterday.
The Turkish president will arrive in Pakistan on an official two-day visit. During the visit, President Erdogan will meet the top political and military leadership of the country.
Pakistan and Turkey will also hold the session of strategic dialogues on October 23 and 24 respectively.
As per diplomatic sources, the foreign ministries of Pakistan and Turkey are working on details of the visit. The tour’s schedule will be finalized in the first week of October.
Prior to Erdogan’s visit, Foreign Minister Shah Mehmood Qureshi will leave for a two-day visit to Turkey on Oct 20.
The Turkish president had confirmed his visit to Pakistan in a meeting with PM Imran Khan on the sidelines of 74th session of the United Nations General Assembly.