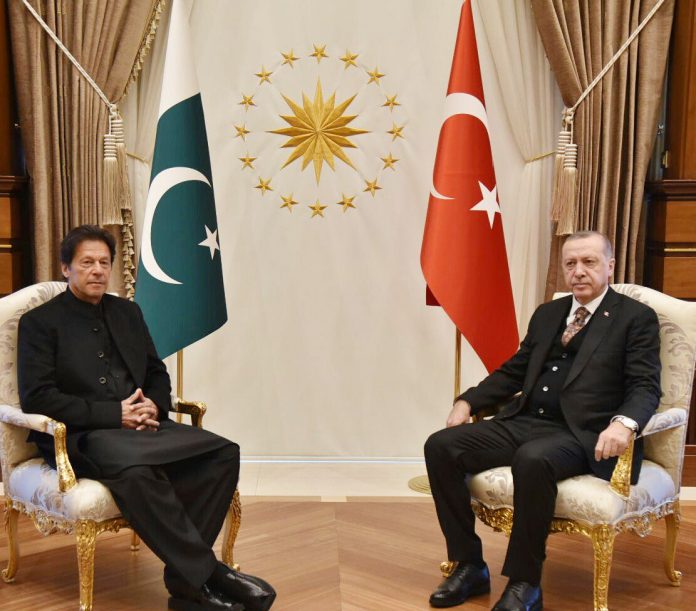 ANKARA: Prime Minister Imran Khan and Turkish President Recep Tayyip Erdogan held a meeting in Ankara on Friday.
The two leaders discussed bilateral relations besides regional and international issues of mutual interests.
Pakistan and Turkey have reaffirmed their commitment to continue joint efforts for peaceful resolution of Afghan issue.
The resolve was expressed during meeting between Foreign Minister Shah Mahmood Qureshi and his Turkish counterpart Mevlut Cavasoglu in Ankara on Friday.
Shah Mahmood Qureshi briefed the Turkish Foreign Minister about his recent regional outreach to important neighbors of Afghanistan for promoting ties within the region and for peace in Afghanistan.
He noted with satisfaction that there is convergence of views between Pakistan and Turkey on important regional and international issues including Kashmir and Afghanistan.
Shah Mahmood Qureshi said the relations between the two countries are not limited to the two governments but extend beyond the horizons of culture, religion and love among the two peoples.
Speaking on the occasion the Turkish Foreign Minister said Pakistan has central role to play in peace and stability in Afghanistan and Turkey acknowledges the efforts of Pakistan towards this end.
During the meeting bilateral relations, promotion of trade and investment and other regional and international issues were also discussed.