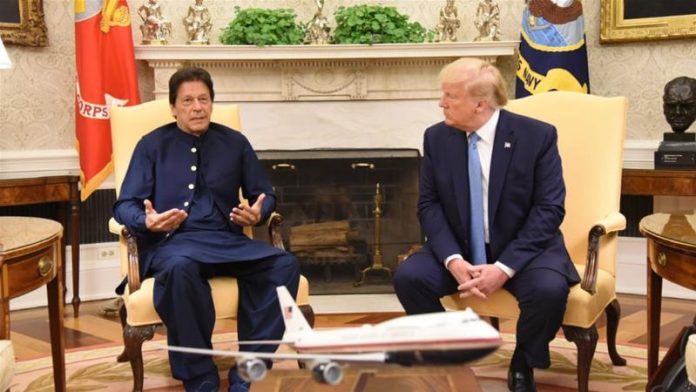 ISLAMABAD: A video pertaining to the diplomatic successes of the Prime Minister Imran Khan highlighting his efforts to foil Indian plans to diplomatically isolate Pakistan has been released on Sunday.
The transformation of Pakistan’s image as peacemaker state, recognition as the best tourist destination, awaking the slumbering world to the Indian atrocities in Kashmir and thwarting the Indian designs of isolating Pakistan are the offerings of PM Imran Khan’s successful and prudent foreign policy to the countrymen.
The Pakistan Tehreek-e-Insaf-led (PTI) government had inherited a Pakistan with badly tarnished image due to machination of antagonistic forces, flawed diplomacy and mistaken priorities of the ruling parties.
The video showed that the international sports have revived in Pakistan and the country was declared the best country in terms of tourism.
Prime Minister Imran Khan’s charismatic personality, visionary policies and unequivocal narrative has dramatically turned things in favour of Pakistan.
Be it a vile Indian plan of diplomatically isolating Pakistan or the evil conspiracy of sending the issue of Kashmir to back burner, unholy plan to label Pakistan as “terror state” or a nefarious scheme to push Pakistan in FATF blacklist, every design has been thwarted by the successful, measured and prudent diplomacy of Prime Minister Imran Khan.
According to a video released on its social media pages by Prime Minister’s Office, the dynamic leadership of the prime minister has dramatically changed the global relevance and face of Pakistan.
Pakistan thwarted Indian designs of diplomatically isolating Pakistan and putting it on FATF list but Imran Khan-led government made the country sail through all the challenging circumstances.
Fulfilling his commitment to become an ambassador of the people of Indian Occupied Jammu and Kashmir, Imran Khan boldly presented their case to the UN General Assembly which made the human rights watchdogs as well as the international media awake from the slumber. Resultantly, the foreign media started covering Kashmir issue including atrocities by the Indian forces.
The US Congress held hearing on the issue and the world leaders including Donald Trump and Turkish President Recep Tayyip Erdogan made public statements. Trump also repeatedly offered to mediate on the issue brushing aside Indian stance of considering the matter purely bilaterally.
The prime minister made Pakistan a linchpin in the region with frequent foreign head-level visits including Abdu Dhabi Crown Prince, Saudi Crown Prince, British Royal Couple, Afghan President and several others.
The credit for the revival of Pak-US ties based on trust also goes to the prime minister who also played a key role to facilitate US-Taliban peace agreement, making the world acknowledge country’s positive contribution. US Special Envoy on Afghanistan Zalmay Khalilzad also admitted of positive change in Pakistan’s foreign policy.
While refusing to join any alien war, the prime minister committed that Pakistan would now play a role of peacemaker and played key role to resolve tension between Saudi Arabia and Iran.
Such dramatic changes in Pakistan’s image abroad also led to the revival of international sports in Pakistan like international test cricket in December 2019, Kabaddi World Cup in 2020 and Pakistan Super League played locally.
Pakistan was ranked as the best holiday destination for 2020 by Conde Nast Traveller, a luxury and lifestyle travel magazine. Forbes Magazine listed Pakistan among the best under-the-radar places to visit in 2020.
The British Backpacker Society declared the country as the world’s 3rd highest potential adventure destination for 2020. Travel advisories to Pakistan were also eased by the UK, USA, Norway and Portugal.