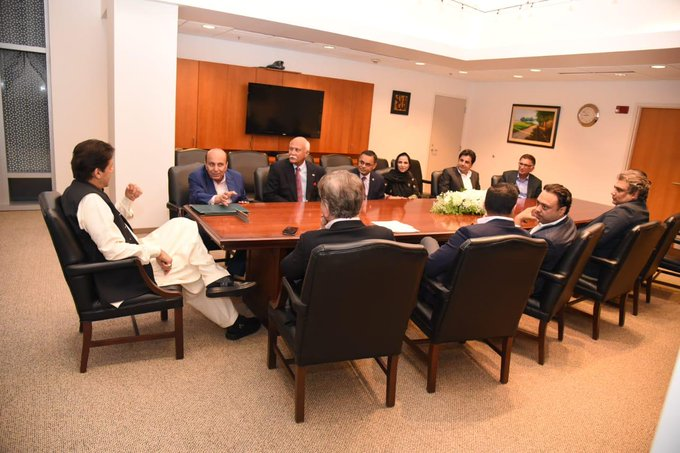 WASHINGTON: Prime Minister Imran Khan has invited US businessmen and investors to benefit from the economic and business opportunities afforded by Pakistan’s strategic location and the connectivity to the broader region.
He said this during a meeting with US investors delegation led by Javed Anwar in Washington DC on Sunday.
The investors appreciated improved security environment in Pakistan and identified areas of interest with regard to investment in key sectors including energy and tourism
Javed Anwar is an efective member of Democratic party and also played a leading role in formation of Pakisan Congress Foundation caucus.
Meanwhile,Texas based leading Pakistani businessman and high ranking influential member of the democratic party Tahir Javed also called on Prime Minister Imran at Embassy of Pakistan in Washington .
Earlier, the Prime Minister Imran Khan has arrived in Washington to hold talks with President Donald Trump on cementing Pakistan-U.S. relations in a range of areas.
The Prime Minister was received by Senior Officials of US State Department, Foreign Minister Shah Mahmood Qureshi and Ambassador of Pakistan to USA Dr. Asad M. Khan.
Enthusiastic Pakistani-American community members gathered near the Embassy Residence to welcome Prime Minister Imran Khan to Washington DC.
Meeting between the two leaders Prime Minister Imran Khan and U.S. president Donuld Trump is scheduled to be held at White House tomorrow.
Prime Minister’s talks with U.S. president will mark an effort by the two leaders to reset the ties.
It will expand bilateral cooperation on trade and investment as well as work toward peace in South Asia at large and Afghanistan in particular.
President Trump will warmly welcome the Pakistani leader in his Oval Office for talks which will then extend to a working luncheon to be attended by Cabinet members and senior Pentagon leaders.
Prime Minister will address a large gathering of Pakistani-Americans who keenly follow his agenda of Naya Pakistan. He will also interact with top American lawmakers and Pakistan Caucus on the Capitol Hill.
A key part of the visit will be the PM’s interaction with American investors as he will invite them to be part of Pakistan’s development efforts in a business-friendly environment.
Advisor to Prime Minister on Commerce Abdul Razzaq Dawood, Special Assistant on Overseas Zulfi Bukhari and Army Chief General Qamar Javed Bajwa are accompanying the Prime Minister while Foreign Minister Shah Mehmood Qureshi is already in Washington as part of the entourage.
It is Prime Minister’s first visit to the United States after assuming office.