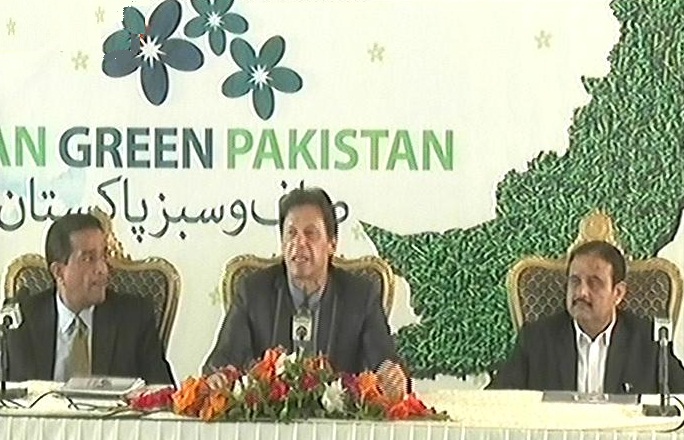 ISLAMABAD: Prime Minister Imran Khan has launched “Clean and Green Pakistan” initiative at a ceremony in Islamabad on Monday.
Speaking on the occasion, he said a country-wide campaign for cleanliness would be launched Saturday next and this would be sustained over the next five years. President, Governors, Ministers and Chief Ministers would participate in ceremonies aimed at making Pakistan clean and green.
He said the plan involves a holistic approached aimed at taking care of air, ground and water pollution.
The Prime Minister said the initiative would have four aspects.
Imran Khan urged members of the civil society to complement efforts of the Government in creating necessary awareness about sanitation and environmental issues. He said cleanliness would form part of the syllabus from class one to five and a beginning has been made from institutions of the Federal Capital.
He said as part of the integrated solution, dumping sites would be identified from village to tehsil level for disposal of solid waste. Waste-to-Energy projects would be undertaken around these sites for generation of electricity to meet local requirements of power.
A cleanliness competition would be held among tehsils after every two months and their concerned officials would be rewarded or penalized on the basis of state of cleanliness in their areas of jurisdiction after every six months.
He said orders have been issued to all petrol pumps and CNG stations to keep their toilets neat and clean and they would be penalized in case of non-compliance.
The Prime Minister said monitors and volunteers would help Government monitor progress in realization of the cherished objective of making Pakistan clean and green. Advocates and ambassadors of clean and green Pakistan would also be designed from different segments of the society including media, celebrities and sportsmen.
The Prime Minister said other countries of the region have made remarkable progress and there is no reason why we can’t make Pakistan clean. Emphasizing the need for cleanliness, he said toilet facility is available just to 42% Pakistanis and lack of this facility also impacts upon tourism. He said it would be Endeavour of the Government to ensure that there is toilet in every home during the next five years.