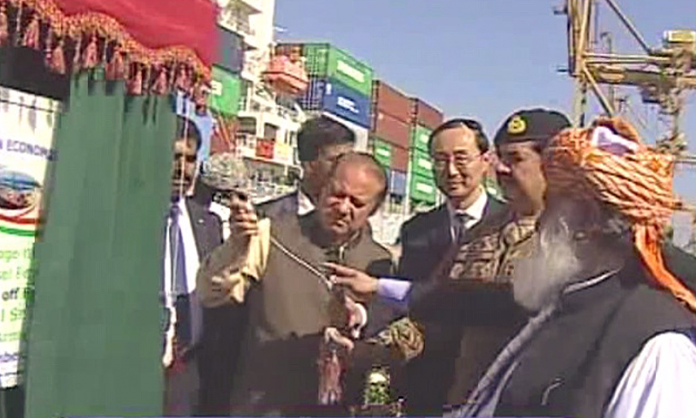 GWADAR: Prime Minister Muhammad Nawaz Sharif kicked off the shipment of trade goods from Gwadar Port to international markets on Sunday marking the historic launch of trade activity through China-Pakistan Economic Corridor.
The trade caravan reached Gwadar from China under the strict security cover of Pakistan Army and other security agencies that would now be shipped to its next export destinations.
Addressing the launching ceremony of the first mega pilot trade cargo, the premier said the dream of CPEC is now turning into reality and this marks the dawn of a new era for the regional development.
The enemies of the CPEC are actually enemies of Pakistan, PM Nawaz said. Every region and the province of Pakistan will benefit from the CPEC that is a comprehensive project of peace and economic progress, he stressed.
Commenting on the terror attack on a shrine in Khuzdar, he reiterated government’s resolve to eliminate terrorism from the country. Those terrorists can not deter us from peace and development, he said.
Starting its journey from Kashghar, the trade cargo reached Gwadar safely from Gilgit Baltistan after travelling throughout the country that also manifested the image of a peaceful Pakistan.
The government has already allocated land for Gwadar Free Trade Zone and the government has also announced concessions for Gwadar Port and Free Trade Zone in Balochistan.
Moreover, the projects of Exclusive Industrial Park Processing Zone and Mineral Economic Zone are also being executed on priority basis.