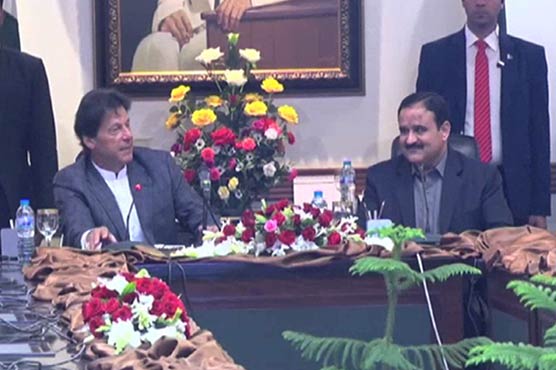 LAHORE: Prime Minister Imran Khan on Saturday directed to immediately demolish the wall of Punjab Governor House in Lahore.
The premier chaired a high level meeting of the Punjab cabinet at the Chief Minister Office. Punjab CM Usman Buzdar briefed PM Khan over the provincial government’s 100-day performance.
The premier while lauding the Punjab government ordered it to accelerate measures for improving the social and economic status of a common man.
The provincial ministers gave presentation to the Prime Minister on the performance of their ‎respective departments.‎ The cabinet also informed the premier about the future goals in Punjab.
The prime minister directed Punjab CM to monitor the provincial departments.
PM Khan ordered to form price control committees and refrained the ministers toi support any corrupt officer.
Punjab Information and Culture Minister Fayyazul Hassan Chohan told media that CM secretariat has reduced its expenses from Rs55 lac per month to Rs8 lac.
The PTI government had earlier pledged to convert several state buildings, including governor houses, into educational institutions, parks, hotels and museums.
Punjab Governor House will be turned into a public park while Khyber Pakhtunkhwa Governor House into a women’s park and a museum. The Governor House at Nathiya Gali will become a boutique hotel.
The Governor House in Quetta, which is spread over 25 acres, will also be turned into a public park.
The Prime Minister House will be converted into a big international university.