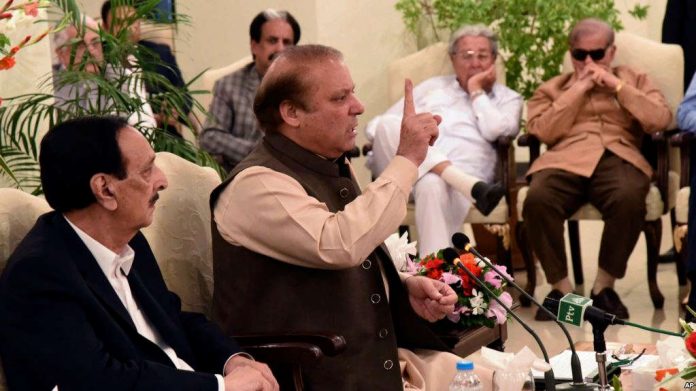 ISLAMABAD: Pakistan Muslim League-Nawaz (PML-N) has decided to take legal action against Justice (retd) Javed Iqbal, the chairperson of National Accountability Bureau.
The move comes three days after the NAB said it would launch investigations against former PM Nawaz Sharif for laundering a huge sum of money to India.
On May 8, the NAB issued a press release, stating that its chief ordered an inquiry against Mr Sharif for alleged laundering of $4.9 billion to India.
The party’s central executive committee rejected the NAB chief’s clarification.
“The NAB chairman should resign from his position,” said former Prime Minister Nawaz Sharif while addressing the party’s decision-making body at Punjab House, Islamabad.
“The anti-corruption institution is being used to force people into switching loyalties.”
In 2016, the World Bank issued a report in which it claimed that $4.9 billion was transferred from Pakistan to India. However, in September that year, the State Bank of Pakistan denied the claim.
“We will not backtrack from our stance on the issue of the NAB chief’s allegations as it is not a small issue,” said Mr Sharif while talking to media at the accountability court.
“We didn’t witness even in the dictatorial eras the situation which is taking place today,” said Nawaz Sharif.
“I was disqualified for life to be present of my party after I was sacked from the premiership. Those, who are doing this, should think about the country.”