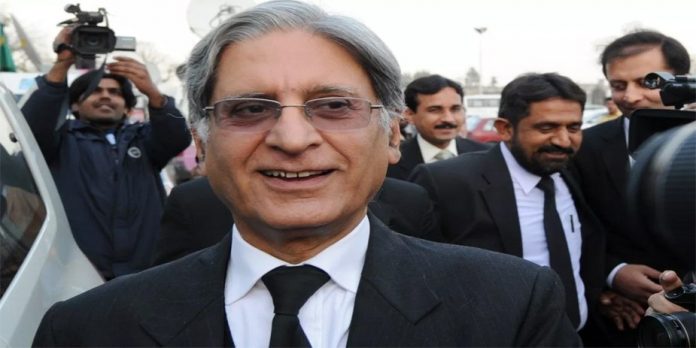 ISLAMABAD: The Pakistan People’s Party (PPP) has refused to retract the name of its nominee for the presidential election after the PML-N expressed reservation on the name of Aitzaz Ahsan.
Chief of his own faction of the Jamiat Ulema-e-Islam-F, Maulana Fazlur Rehman Sunday contacted PML-N president Shehbaz Sharif and told him Asif Ali Zardari has refused to take back the name of Aitzaz Ahsan.
The PML-N, while suggesting the names of Yousuf Raza Gillani and Raza Rabbani, expressed reservation on Ahsan’s nomination, saying the veteran PPP leader had a strong stance against the party.
An All Parties Conference (APC) of the grand opposition chaired by Shehbaz Sharif could not reach consensus to bring a joint candidate of the opposition for the elections of the president to be held on September 4.
The meeting, which was attended by the leaders of 11 opposition parties including PPP, JUI-F, Awami National Party (ANP) and Mutahida Majlis-e-Amal (MMA), continued for around four hours.
During the meeting, the participants expressed grave concerns regarding PPP and complaint of the party’s withdrawal from premier elections and deciding against voting in favour of Shehbaz Sharif.
PML-N leaders Abdul Qadir Baloch, Ameer Muqam, Marriyum Aurangzeb, Tariq Fazal Chaudhary, Sardar Ayaz SAadiq, Ahsam Iqbal among other were present in the meeting.
Yousaf Raza Gillani and Khurshid Shah led the PPP delegation which includes Sherry Rehman, Qamar-uz-Zaman Kaira and others.
Similarly, Maulana Fazl-ur-Rehman, Liaquat Baloch, Maulana Abdul Ghafoor Hyderi and Maulana Awais Noorani from MMA participated in the APC.
Talking to media after the meeting, PML-N leader Ahsan Iqbal said that the opposition parties have agreed to bring a joint candidate of the opposition for the elections of the president to be held on September 4, adding that the name of the candidate will be announced today.
He said that the PPP representatives have sought time till tonight to consult with their top leadership.
The former interior minister said that all the opposition parties have supported the proposal for giving right to vote to overseas Pakistan, but the Election Commission has introduced a system to this effect in haste.
Speaking on the occasion, PPP leader Qamar Zaman Kaira said it was need of the time that the opposition parties remain united.