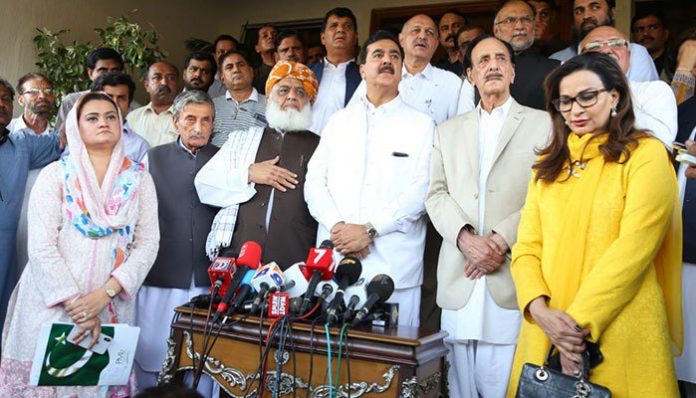 ISLAMABAD: The Pakistan Muslim League-Nawaz (PML-N), Pakistan Peoples’ Party (PPP), Muttahida Majlis-e-Amal (MMA) and Awami National Party (ANP) has decided to form a grand opposition in the National Assembly.
The senior leadership of the PML-N, PPP, ANP and MMA met in Islamabad to discuss ways and means to form governments in the centre and Punjab.
The meeting also discussed the prevailing political situation in the country and way forward to effectively address their grave concern of massive rigging.
The grand opposition will issue a white paper over rigging during the elections and meet for an All Parties Conference in two days.The strength of the grand opposition will stand at 120 in the National Assembly compared to 116 seats for the Pakistan Tehreek-e-Insaf.
According to sources, political parties from Balochistan will also be taken in confidence over the grand opposition alliance. Meanwhile, Maulana Fazlur Rehman has announced that the MMA will not boycott proceedings of parliament.
The PPP delegation led by Khursheed Shah includes Sherry Rehman, Naveed Qamar and Qamar Zaman Kaira and former prime minister Raja Pervaiz Ashraf. PML-N president Shahbaz Sharif is leading his party’s delegation which includes Khawaja Saad Rafique, Khawaja Asif among others. Haji Ghulam Bilour and Mian Iftikhar are representing the ANP while Maulana Fazlur Rehman and Maulana Anas Noorani are representing the MMA.
Meanwhile, in party shura meeting JUI-F head Maulana Fazalur Rehman directed the party parliamentarians to take the oath.
Addressing media, senior leaders of the Pakistan Muslim League-Nawaz, Pakistan Peoples’ Party, Muttahida Majlis-e-Amal and Awami National Party said there is no parallel of rigging on this scale in elections in the country, in which Pakistan Tehreek-e-Insaf’s Imran Khan claimed victory.
PPP’s Yousaf Raza Gilani and MMA chief Fazlur Rehman also decried media censorship.
“The entire world, the nation and ECP [Election Commission of Pakistan] should note that there is no instance of all parties rejecting election results unanimously like this ever,” said Fazl.
Those stealing the mandate of masses should be ashamed of themselves, he said.
Gilani said that an all parties conference would be held soon, and a strategy would be formulated to take up the issue of rigging.
The parties will play the role of a strong opposition inside and outside the Parliament, the former prime minister added.