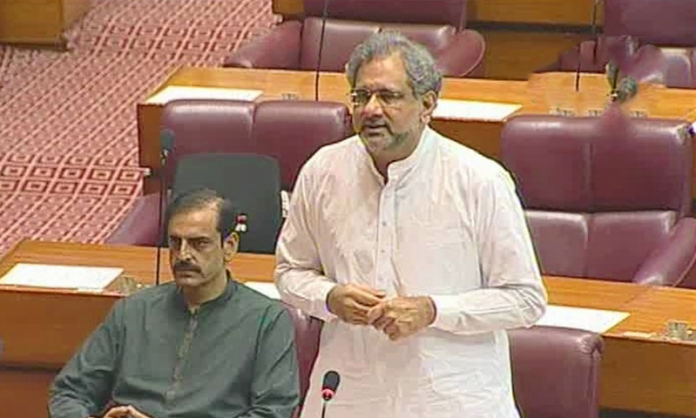 ISLAMABAD: Pakistan Muslim League-Nawaz (PML-N) on Friday rejected the first federal budget presented by the incumbent government and termed it an “anti-people federal budget” put forth by the ruling party.
Speaking in the National Assembly, the PML-N leader Shahid Khaqan Abbasi said due to the government’s incompetent policies, rupee devaluation had added Rs1,400 billion to the debt servicing requirement of the country.
“Without increasing our debt, our debt servicing increased. If this continues the same way, next year we could be looking at debt servicing of Rs4,000 billion,” he added.
“The country is not progressing and the government has added 40 per cent more taxes. How will the economy or the country progress? What will happen to the poor? They will face the brunt of this increase,” Abbasi stated.
On the subject of taxes in the budget, the former prime minister alleged that “people who don’t pay taxes expect the people of Pakistan to pay their taxes”.
Abbasi further said that ministers should “not be angry and should realise name calling and anger will not fix the situation”.
“There are ways to deal with the problems as per the Constitution. We reject this budget since it is against the people. This is the start of the decline for our economy,” he stated.
PML-N leader Ahsan Iqbal, taking the floor after Abbasi, stated that the budget has provided no relief for farmers considering that Pakistan is an agro-based economy.
“The budget for education has also been reduced,” Iqbal stated, adding that the budget is “anti-people, anti-poor, anti-education”. He added that the budget should be retracted because it will lead to unemployment and poverty.