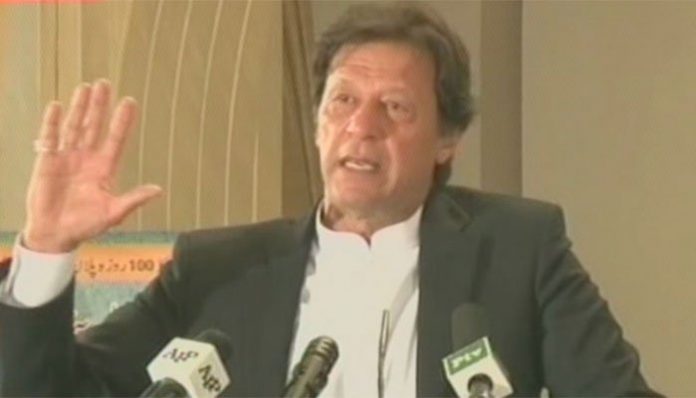 ISLAMABAD: Prime Minister Imran Khan has said that a society can progress only if rule of law is upheld in the country.
Addressing one day symposium on ‘Alarming Growth in Population’ in Islamabad on Wednesday, he said the basis of success of state of Madinah was rule of law. He said democracy and law complement each other.
Imran Khan said visionary leaders think ahead of times and unfortunately the leadership in the last three decades did not vision or plan anything for development of the country. He said short term planning does not bear fruit, and only long term planning is a recipe to success.
The Prime Minister said in new Pakistan rule of law is being implemented. He referred to the case of CDA that despite being under to him asked questions about his property in Banigala. He said six new legislations will be presented in the National Assembly soon to bring legal reforms.
Imran Khan said many investors have expressed their desire and intent to invest in Pakistan due to enhanced confidence on policies of new government and improved governance structure.
Imran Khan said, being an eco-lover, he takes the issue of environment very seriously. He said population growth rate is also linked with increased burden on environment. He said the forests have been brutally cut down, leading to rising temperature in many parts of the country.
The Prime Minister said a strong political will is required to tackle the issue of mushrooming growth in population. He said education and technology will be used to control population. He said all stakeholders, including Ulema, have to play role in this effort and mosques should spearhead this message. He said a comprehensive campaign will be launched on population control in media to inform the people of the problems associated with rising population and also its impact on environment. He said everyone will be taken on board on this important national issue.
Earlier, in his address Chief Justice Mian Saqib Nisar said the rapid rate of population is putting immense stress on our limited resources.
He said essential resources like water are already facing pressure due to increased use by expanding population. He lamented that no attention was paid to build dams for the last 40 years.
Mian Saqib Nisar said we have to promote the better usage of water in the country to meet the requirements of burgeoning population. He said population of Pakistan could reach to 450 million in thirty years if current rate of growth is not checked.
He said media can play an important role in spreading awareness about merits of less population for national development. He assured the government of judiciary’s complete cooperation in implementing a Madinah like state in Pakistan.
Chairperson Benazir Income Support Programme Dr Sanya Nishtar said serious steps need to be taken to check the rampant growth in population. She gave three point recommendations on this issue.
Renowned religious scholar Maulana Tariq Jameel said Imran Khan is the first prime minister who presented the concept of state of Madinah. He said poverty and social pressures are important causes of population growth. Maulana Tariq Jameel said the issue of population control needs to be seriously taken.
Earlier, Secretary Ministry of National Health Services Zahid Saeed informed the participants that a nationwide campaign to highlight the issue of population control will be started in cooperation with all provinces soon.
The Secretary said a number of meetings were held on the issue and the provinces have also given their recommendations on controlling the population. He said the Prime Minister called meeting of Council of Common Interest on this issue in which all recommendations were approved with consensus.
He said Pakistan is the sixth most populous country in the world and the main reasons of this alarming increase are lack of awareness and no clear policy on this issue.
Prominent experts and distinguished scholars also highlighted new demographic realities of Pakistan, family planning in the context of mother and child health, quality of population and productivity and advocacy campaign for population planning in the country.
A documentary on population dynamics was presented at the event, while renowned vocalist Shahzad Roy sang the theme song.