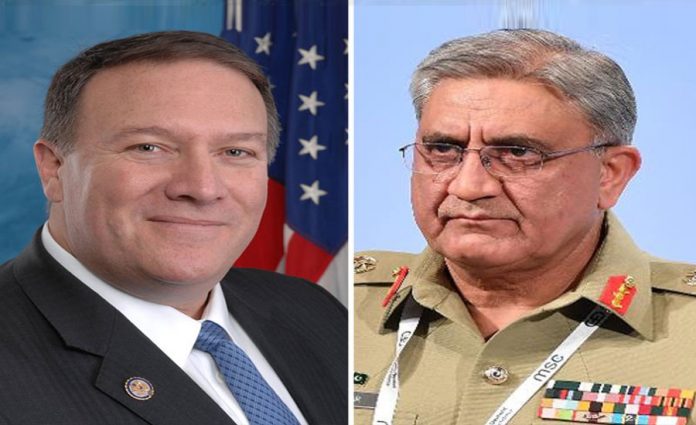 RAWALPINDI: US Secretary of State Mike Pompeo on Friday telephoned Chief of Army Staff (COAS) General Qamar Javed Bajwa and informed him about the US action to kill Iran Revolutionary Guards commander Qasem Soleimani.
During the telephonic conversation, the US Secretary of State said that they were protecting American interests in the region, adding that Iran is exacerbating the situation in the region.
Mike Pompeo went on to say that they would protect US interests, personnel, installations and allies.
Inter-Services Public Relations (ISPR) also confirmed that Chief of Army Staff (COAS) General Qamar Javed Bajwa received a call from US Secretary of State Mike Pompeo and discussed regional situation following recent escalation in Mideast after the US killing of Iranian top military commander.
ISPR in a statement said that regional situation including the possible implications of recent escalation in Middle East was discussed between COAS Bajwa and Pompeo. DG ISPR futher said that Army Chief Bajwa emphasized on the need for maximum restraint and constructive engagement by all of the concerned parties to de-escalate the situation in broader interest of peace and stability.
COAS Bajwa also reiterated the need for maintaining focus on success of Afghan Peace Process.
Earlier, the US Secretary of State Mike Pompeo said that the US was “committed to de-escalation” after the killing of top Iranian commander Qasem Soleimani in an American strike.
Pompeo tweeted that he had spoken with British Foreign Secretary Dominic Raab, German Foreign Minister Heiko Maas and Chinese Politburo member Yang Jiechi about the killing.
“Thankful that our allies recognize the continuing aggressive threats posed by the Iranian Quds Force,” he wrote. “The US remains committed to de-escalation.”
The United States announced earlier that it had killed the commander of the Islamic republic s Quds Force in a strike on Baghdad s international airport.
The strike also killed the deputy chief of Iraq s powerful Hashed al-Shaabi paramilitary force.
Pro-Iranian demonstrators laid siege to the US embassy in Baghdad on Tuesday, angered by US weekend air strikes that killed two dozen fighters from the hardline Kataeb Hezbollah paramilitary group.
The strikes were in response to a rocket attack last week that killed an American contractor working in Iraq.
The Pentagon said Soleimani had orchestrated attacks on coalition bases in Iraq over the past few months, including on December 27, the day the contractor was killed.
Soleimani “also approved the attacks” on the US embassy in Baghdad, according to the Pentagon.