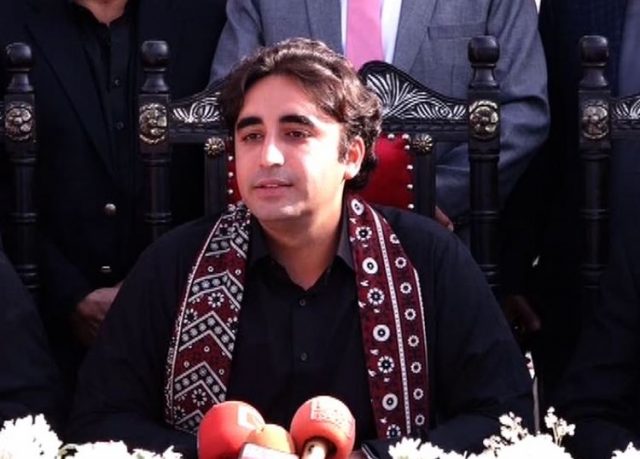 KARACHI: We are ready to launch a long march if attempts to undermine the 18th Amendment are not stopped, PPP Chairperson Bilawal Bhutto Zardari warned on Saturday.
“We will not tolerate attacks on the 18th Amendment,” he told reporters at the Karachi Press Club. “The 18th Amendment and freedom of the media are under attack from all directions.”
The PPP’s top leaders have been speaking about attacks on the 18th Amendment for the last couple of months and they connect it with the cases against former president Asif Ali Zardari and his sister Faryal Talpur. Zardari and Talpur are being investigated in a money laundering case involving over Rs35 billion funneled through fake bank accounts at three local banks.
“People are asking questions about the criticism of the 18th Amendment by the ‘selected’ ministers,” Bilawal said. “Why are the courts issuing awkward and contradictory orders?”
The PPP head urged political parties to work together to regain parliament’s lost space, adding that if other institutions are indulging in activism then what is stopping parliament from becoming active. “No other institution can use judicial functions but the prime minister,” he added. “The government may succeed if the selected prime minister realises the power of parliament.”
Commenting on the ongoing anti-encroachment drive in Karachi, the PPP chairperson said that his government will file a review appeal in the Supreme Court. “It makes me very sad when I see the government and elected mayor demolishing the roofs of poor people,” the PPP chairperson said. “We have to take a humanitarian approach towards this issue.”
Bilawal said that Karachi needs a new master plan. “We will have to get help from urban planners and experts to design a new master plan.”