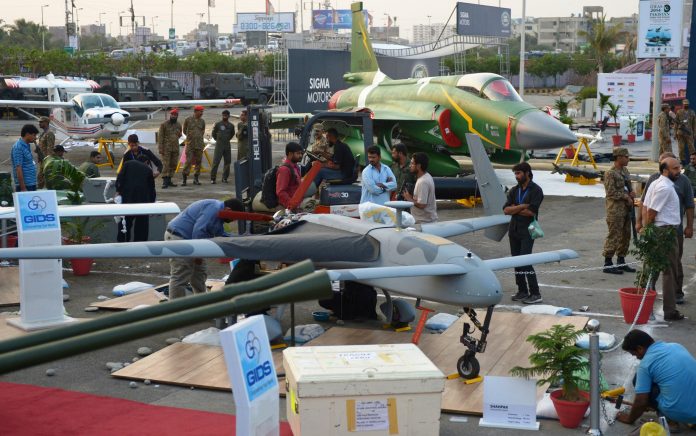 KARACHI: Four-day International Defence Exhibition IDEAS-2018 begun at Expo Centre Karachi on Tuesday.
President Dr Arif Alvi inaugurated the exhibition which is being attended by chiefs of three armed forces and services chiefs from friendly countries among other dignitaries.
More than 522 foreign and national companies and 262 delegations from 50 countries including China, Russia, USA, France, Germany, Turkey ,Poland, South Korea and host Pakistan have established their exclusive country pavilions to display their productions in one of the largest Defence Exhibitions of the region.
Pakistan Air Force is also showcasing indigenously manufactured products in the event.
Strict security arrangements are in place for the event whereas a traffic plan has also been devised to avoid congestion on roads.
Personnel of police, Rangers and law enforcement agencies have been deployed around the city. A few roads leading towards the expo centre have been closed for traffic.
An alternative traffic plan have been chalked out to facilitate the citizens.