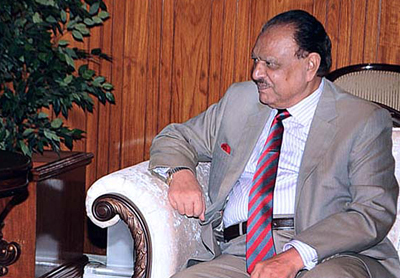 DUSHANBE: President Mamnoon Hussain on Wednesday said Pakistan and Tajikistan enjoy deep relations rooted in common history, culture and faith, and this relationship was strengthening with the passage of time.
He said this relationship could be further strengthened through enhanced cooperation in diverse areas including trade, industry and investment for a win win situation for both and improving the quality of life in the two brotherly countries, he added.
The president expressed these views during the meetings with Prime Minister of Tajikistan Kokhir Rasulzoda and Speaker of Tajik Parliament (Lower House) Shukurjon Zuhurov, who separately called on him here.
Government Ministers and Members of Tajik Parliament were present during the meetings.
He stressed the need of increased bilateral cooperation in different fields including oil and gas, agricultural research, food processing, textile machinery, exports, infrastructure, scientific research, surgical instruments, sports, culture etc as well as easing visa policies.
The president also stressed for initiating joint venture projects in different sectors. He said the two countries should also focus on enhanced road, rail and air connectivity, which would give Pakistan access to Central Asian States whereas Tajikistan would benefit from Pakistan’s sea ports to augment its trade.
The president also stressed the need of enhanced cooperation between the Parliaments of Pakistan and Tajikistan, which was welcome by the Tajik side.
He congratulated the Tajik side for successful holding of international conference on water.
The president also congratulated Tajikistan for taking charge of the Economic Cooperation Organization (ECO) and expressed the hope that ECO would be able play more effective role.
The president said Pakistan and Tajikistan had a common desire for a stable and peaceful Afghanistan and the two brotherly countries were working with Afghanistan to achieve this objective.
Meanwhile, President Mamnoon Hussain and President Gurbanguli Berdimuhamedow of Turkmenistan agreed to further strengthen bilateral relations in different fields of life including trade and economy.
They also agreed on early implementation TAPI (Turkmenistan-Afghanistan-Pakistan-India) gas pipeline project.
Agreement to this effect was reached between the two leaders during a meeting held here on the sidelines of high level international conference on the International Decade for Action “Water for Sustainable Development” 2018-28 being hosted by Tajikistan.
Senior officials from the two sides were also present in the meeting.
President Mamnoon said in order to boost bilateral trade there was a need to have enhanced interaction and contacts between the two countries’ private sectors and chambers of commerce.
He also stressed the need of holding trade exhibitions in both the countries to explore trade and investment opportunities.
The President of Turkmenistan agreed with the proposals of President Mamnoon and desired to enhance cooperation with Pakistan in every field.
President Mamnoon said Pakistan supports Tajikistan’s policy of non-alignment. – APP