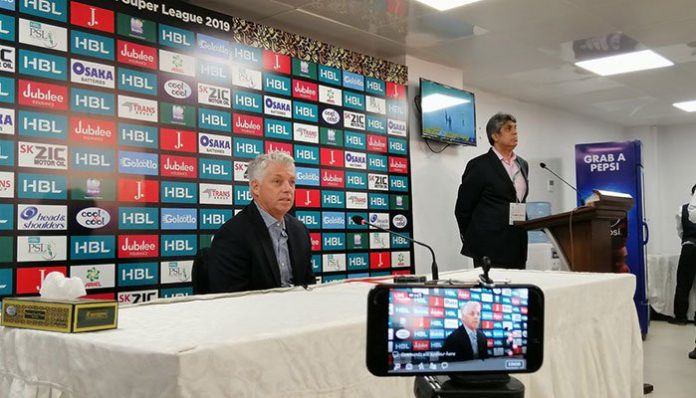 KARACHI: Dave Richardson, the CEO of the International Cricket Council, hailed the hosting of Pakistan Super League matches in Pakistan and said the country has set a very good example of how to employ cricket to unite people.
Talking to media in Karachi on the sidelines of the PSL final, Richardson said that PSL matches in Pakistan were a great step towards bringing international cricket back to the country.
“ICC has tried to support Pakistan in getting international cricket back here on a more regular basis and I think everyone agrees that the PSL matches in Pakistan and the final in Karachi are a great step forward in achieving that. You should also appreciate the work done by Pakistan as a country and Pakistan’s security forces,” he said.
“The perception outside of Pakistan was that it was quite a dangerous place to visit in the past and that perception slowly but surely has been changed through the good work that has been done,” the outgoing ICC chief highlighted, adding that so many foreigner players coming to play in Pakistan was indicative of that.
Richardson also praised Pakistan for its attitude towards the recent tragic incident of terrorism in New Zealand.
“You saw what happened recently in New Zealand. The attitude Pakistan as a country and the Pakistan Cricket Board showed towards this type of trouble the world is facing is commendable,” he said.
“We talk about the spirit of cricket, about the purpose of cricket which is to unite, inspire and empower the community. Pakistan is being a good example to the world in this regard and hope they keep it up, both off the field as well as on the field. We must commend Pakistan team over the last year or so with the spirit and the way they are playing the game on the field,” the former South African cricketer added.
When asked about the issue of Indian cricketers wearing army caps during an international game, the ICC chief said that it was a one-off consent granted to the team as the wearing of the caps was simply towards showing sympathy with the people who lost their lives in the attack and in particular to help them raise funds for the families of the people who died.
“It was given solely with that purpose and in particular it was given subject to them making no political statement around what was happening,” he said.
“I would like to re-emphasise how important it is for all countries to follow the example of Pakistan and make sure that we are using cricket to unite people as opposed to using it as a force to divide,” Richardson added.
On media reports that India may decide against playing Pakistan in the upcoming World Cup, the ICC chief said all teams have signed a members’ participation agreement which requires them to participate in all matches.
“Any unjustified non-compliance with that provision in the agreement will kick in and points will be awarded accordingly,” he said.
“I know that Pakistan have not played India in bilateral series and up until now the bilateral series have always been a matter for the boards to determine who they play and against whom. At ICC events where it’s been possible and where the draw has allowed Pakistan to always play against India and we see that continuing at the World Cup, both in the round robin stage of course and if necessary in semifinals and final.”