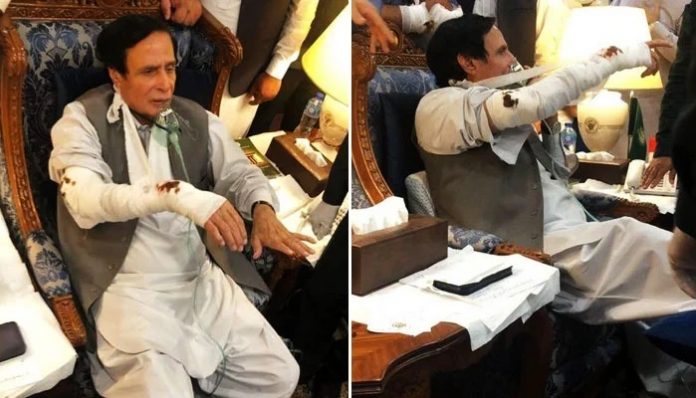 LAHORE— Pakistan Tehreek-e-Insaf (PTI) members boycotted from Punjab Assembly session after arresting at least its four colleagues by police for attacking the deputy speaker and creating a ruckus.

In an unprecedented move, police Saturday afternoon entered the hall of Punjab Assembly and taken at least 10 PTI lawmakers into custody for slapping the Deputy Speaker Dost Muhammad Mazari.

Mazari at around 5:15pm resumed the assembly session but Punjab Assembly staff, mostly recruited by Pervaiz Elahi, turned off the public address system and lights in the hall and Mazari was using a megaphone to conduct the assembly business amid uproar from the PTI members.

PTI’s pro-Elahi lawmakers walked out of the assembly after the session resumed, announcing a boycott. However, members of dissident PTI groups were seen in the hall as the voting began.

Earlier, videos from inside the assembly hall showed police force in riot gear trying to remove members from the hall who had stalled the house’s proceedings.

However, Pervaiz Elahi, the PTI candidate for chief minister slot, denounced the police action inside the assembly hall, saying it violated the sanctity of the house.

Journalists have faced hurdled on coverage created by the assembly staff and security under Elahi’s control.

The assembly met today to elect the new chief minister, however, the session turned violent as soon as it began Saturday.

PTI members brought lotas with them which they hurled in the assembly hall. As Mazari arrived at the dias to chair the session, PTI members hit him with lotas.

Mazari was even slapped by the members after which he was escorted by the Seargant-At-Arms.

After the violence, anti-riot force that was positioned in the assembly premises entered the assembly hall. However, they were later made to leave after PTI members who objected to their presence.

Subsequently, there was more uproar in the assembly and Pervaiz Elahi was attacked by PML-N members. He was later seen with a crepe bandage at his left arm and wearing an arm sling. Elahi also wore an oxygen mask.

Speaking to reporters, he said that he was sitting at the side and urging restrains, but people at the instigation of Hamza Shehbaz attacked him and broke his arm.

Elahi said Punjab IGP was also involved in the attack.

He then raised his arms to pray to Allah for justice and said that he will never forgive the Sharif for the hooliganism.

Pervaiz Elahi’s son Moonis Elahi, who was federal minister under Khan, arrived at the assembly and told reporters that PML-N members had attacked a “senior citizen.”

An angry Moonis Elahi dared PML-N lawmakers to fight him.

Delays in the morning
Earlier, the session, which was scheduled to start at 11am delayed by more than 90 minutes.

Shahbaz is the opposition candidate, supported by the PML-N, PPP and Independent candidates. Elahi has the backing of the PTI, PML-Q and the Rah-e-Haq Party.

The session is being held after the Lahore High Court rejected the pleas of Speaker Pervaiz Elahi and restored the powers of Mazari to conduct the election April 16 (today).

Earlier this month, Elahi withdrew Mazari’s powers after their disagreement on the session’s date. The latter then filed a petition with the LHC which overturned the speaker’s decision.