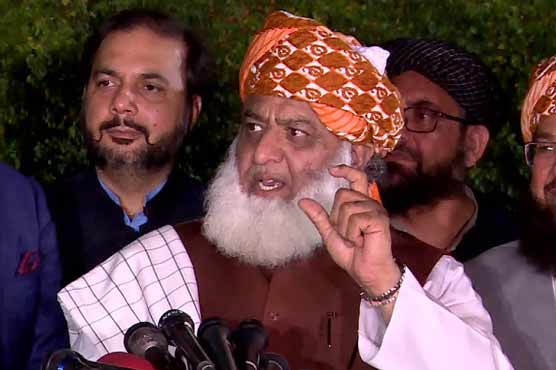 KARACHI: Jamiat Ulema-e-Islam-Fazl (JUI-F) chief Maulana Fazal-ur-Rehman has criticized Pakistan Tehreek-e-Insaf (PTI) led government and said that national institutions are not on one page, political parties are currently fighting for the survival of the state.
Fazal-ur-Rehman while talking to media after All Parties Conference (APC) said that the country is getting into more and more issues. There are many problems including loadshedding and the entire system of government and institutions do not appear on one page.
Replying to a question asked regarding completion of five years of the government, Maulana said that the survival of the state depended on economic prosperity. For the first time in history, the budget has gone below zero. This is tantamount to cursing the nation, he added.
The Constitution of Pakistan is an agreement between the provinces and the vote is the trust of the nation, which should be returned.
Talking about the construction of a temple in Islamabad, he said that the status of minorities in Pakistan is like equal citizenship. We have said that the Council of Islamic Ideology (CII) should decide in this regard, this matter should be sent to them.
He said the government has no policy and instead to bring change, the nation has been destroyed. We are concerned about the economic situation and we are all fighting for the survival of the state.
Maulana said in such a situation, no one from abroad is ready to help. The 2018 election was rejected on the first day. It has been established nationally that elections were fraud and these are fake rulers.