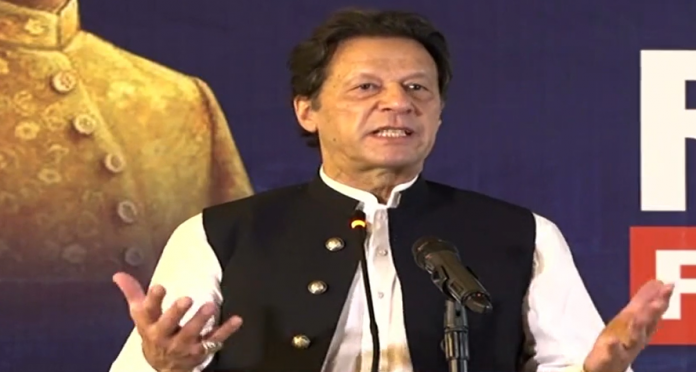 Addressing a gathering at the Islamabad High Court Bar, Imran questioned whether it is in the best interests of the country to have such people imposed on it.

Imran Khan stated that no such pressure was applied to the media in any democracy which exists today, adding that he challenges the person on bail to find work.

Imran Khan went on to that Pakistan was not founded to pass from one enslavement to another, adding that the main reason for the establishment of Pakistan was that people desired independence.

Imran Khan stated that Rs7000b of poor countries’ money is in offshore banks, adding that there is no accountability of the powerful in affluent countries.

The PTI Chairman stated that the rule of law was the most important principle of Riyasat-i-Madina, adding that all developed countries cannot imprison the wealthiest individuals. Imran said only minor thieves have been apprehended in developed countries.

Imran Khan stated that it was written that if he (Imran) was not removed as Prime Minister through a vote of no-confidence, then turmoil would follow.

The former premier said that one of the officials was giving order to whom that oust the prime minister of Pakistan, adding that it was written in the cipher that Pakistan would be forgiven if the no-confidence vote was successful.

Imran asked the prime minister of 220 million people if anyone else is capable of writing a cypher.

Imran Khan stated that following the next day of cipher, a vote of no-confidence motion was brought against him (Imran Khan).

The PTI Chairman went on to say that the cipher investigation is critical to the country’s future.

“We sacrificed for the US,” Imran Khan added, “but no compliments came in response.”

The PTI Chairman stated that if the powerful are handed NRO-I and NRO-II, the country will have no future.

“We are giving the biggest looter in the country a concession of Rs1100 billion,” Imran Khan stated.

The former premier stated that a no-confidence vote against British Prime Minister Boris Johnson is imminent due to the failure to execute SOPs.

Imran Khan stated that exports were banned during the PML-N’s era, but that the country had record exports under the PTI’s tenure.

The former prime minister said holding fair and free elections is the only option for the country, adding whoever imposes this type of system on the country is ruining his own reputation.