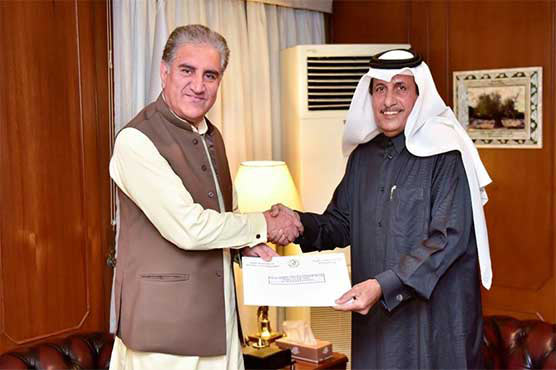 ISLAMABAD: Qatar has formally invited Pakistan to attend a signing ceremony of the peace deal between the United States and the Afghan Taliban scheduled to be held on Feb 29 in Doha.
On behalf of the Qatari Foreign Minister, the invitation was extended by the Qatari Ambassador to Pakistan Saqr Bin Mubarak during a meeting with Foreign Minister Shah Mahmood Qureshi in Islamabad today.
In his remarks on the occasion, the foreign minister said Pakistan and Qatar have played a pivotal role in furthering the Afghan reconciliation process.
FM Qureshi said Pakistan welcomed the peace deal between the United States and the Taliban. He said it has always been the stance of Pakistan that there was no military solution to the Afghan conflict. He said the world has been acknowledging Pakistan s viewpoint on the matter.
Qureshi expressed confidence that the peace deal would lead to intra-Afghan dialogue.
Both sides have agreed to a week-long “reduction in violence”, and it was stated that if the violence reduction period were observed successfully, the United States and the Taliban would sign an agreement on Feb. 29.
Afghan, Taliban and U.S. sources said a peace deal could be signed this month, allowing a withdrawal of some of 13,000 U.S. troops and thousands of other NATO personnel that remain in Afghanistan following the U.S. intervention to oust the Taliban in 2001.
Previous attempts at negotiating peace agreements have been scuttled by Taliban attacks, most recently in December last year when an attack on a U.S. military base put talks on hold.
U.S. President Donald Trump said on Thursday there was a “good chance” of reaching an agreement with the Taliban on a reduction of U.S. troops in Afghanistan.
U.S. Secretary of State Mike Pompeo said an important breakthrough had been made in peace talks with the Taliban in recent days, and Defence Secretary Mark Esper said they had negotiated a proposal for a week-long reduction in violence.