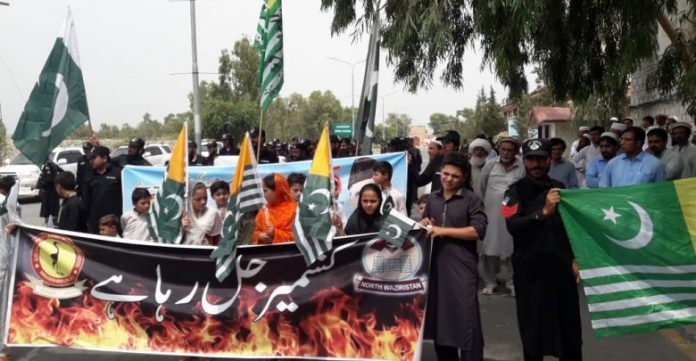 PESHAWAR: Like other parts of the country, the people of tribal districts also took out rallies in support of right to self-determination of the people Indian Held Kashmir (IHK) on Friday.
Participants of the rallies were holding banners and placards and chanted slogans against atrocities on Indian troops in IHK, particularly after revocation of special status of the held valley by the Indian government.
In Khyber tribal district, Kashmir solidarity rallies were held in Landikotal, Jamrud and Bara bazaars.
The rally in Jamrud was led by Deputy Commissioner Mehmood Aslam Wazir, while tribal notables and activists of different political parties also participated in the rallies. Participants of the rally marched from the AC office to Bab-e-Khyber and chanted slogans against severe human rights violations in IHK by the Indian occupation forces.
AC Landikotal led the rally in Landikotal which marched from the Bypass Road to Hamza Chowk. The participants were carrying Pakistani and Azad Kashmir flags. They chanted slogans against the Indian prime minister for revoking the special status of IHK.
In Bara Bazaar, the rally was taken out by trade union. The participants vowed to extend moral and political support to the people of IHK for their right to self-determination. The highways were closed during the rallies.
In Bajaur tribal district, the main rally was held in Khar Bazaar which was led by DC Usman Mehsud and DPO Shahab Ali Shah. Rallies were also held by traders, students and civil society in Inayat Killi Bazaar, Phatak Bazaar and Raghgan Bazaar.
Speakers on the occasion expressed disappointment over silence of world human rights bodies over plight of the IHK people. They appealed to the world powers and human rights bodies to play their role in stopping rights violations in IHK.
A rally for Kashmir solidarity was also held in Miranshah, the main town in North Waziristan.
The rally started from Governor Model School and reached Eidak Gate where it turned into a massive public gathering. The participants were holding banners and placards inscribed with slogans against Indian brutalities in IHK.
DPO Shafiullah Khan said while addressing the rally that the whole Pakistani nation stands with the people of IHK for their right to self-determination.