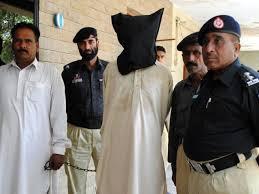 PESHAWAR: Counter Terrorism Department (CTD) has arrested main accused in Rehman Bab Terminal, Jan Mohammad, on Saturday.
At least six containers were destroyed in an attack on Nato containers terminal in Peshawar. According to CTD, the accused Jan Mohammad belonged to a banned outfit and hails from Khyber Agency.
The accused also revealed the names of his other accomplices.