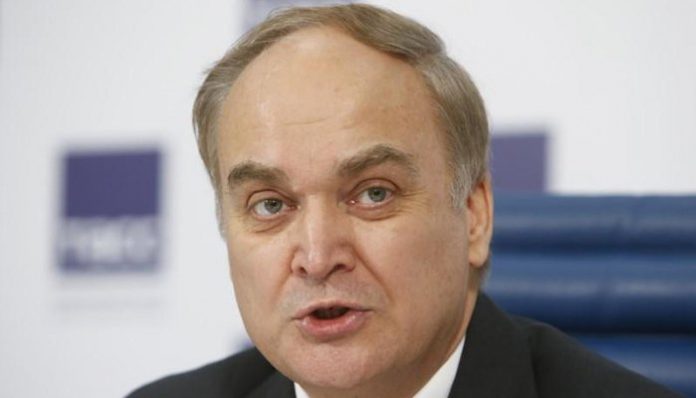 MOSCOW: Russia’s ambassador to the United States on Saturday warned that there would be consequences for the US-led military strikes on Syria, adding that it was not acceptable to insult Russia’s president.
“A pre-designed scenario is being implemented,” Russian Ambassador Anatoly Antonov said on Twitter. “Again, we are being threatened. We warned that such actions will not be left without consequences.”
“Insulting the President of Russia is unacceptable and inadmissible,” he added. “The US- the possessor of the biggest arsenal of chemical weapons – has no moral right to blame other countries.”
The United States, Britain and France carried out a wave of punitive strikes against Bashar al-Assad´s Syrian regime on Saturday in response to alleged chemical weapons attacks that President Donald Trump branded the “crimes of a monster.”
As Trump embarked on a White House address to announce the action — taken in defiance of Russia´s threat to respond — explosions were heard in the Syrian capital Damascus, signalling a new chapter in a brutal seven-year-old civil war.
Several consecutive blasts were heard at 4:00 am (PST 6:00 am), followed by the sound of airplanes overhead. Smoke could be seen rising from the northern and eastern edges of the capital.
“A short time ago, I ordered the United States armed forces to launch precision strikes on targets associated with the chemical weapons capabilities of Syrian dictator Bashar al-Assad,” Trump said, in a prime time address.
“A combined operation with the armed forces of France and the United Kingdom is now under way. We thank them both,” Trump added.