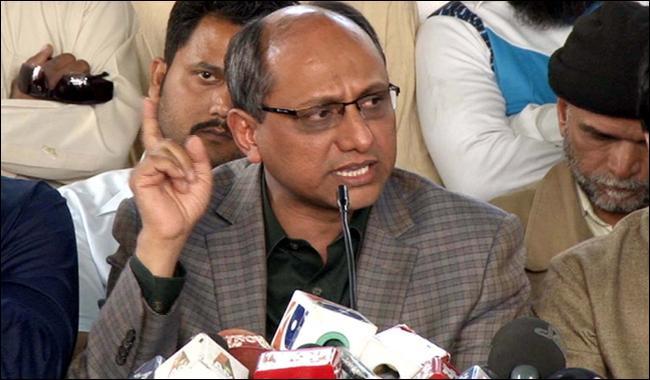 ISLAMABAD: Pakistan People’s Party (PPP) leader Saeed Ghani resigned from his Senate seat on Thursday to join the Sindh Assembly after his PS-114 by-poll victory last week.
In an emotional speech delivered on the floor of the Senate, Ghani said the decision to leave the Upper House and join the provincial assembly had been a difficult one for him, and that he would miss his colleagues.
“Forgive me for any offence I might have caused,” he said, tearing up.
He assured the Senate that no rigging had taken place during the PS-114 by-polls.
Ghani claimed that although he was “made offers of money” several times, he “never forgot where he came from”.
The PPP leader won the by-polls by more than 23,000 votes, defeating Muttahida Qaumi Movement’s (MQM) Kamran Tessori, who secured over 18,000 votes.
The MQM, however, had called the election “completely rigged by the PPP Parliamentarians, who misused the entire Government of Sindh machinery and the local police”.
The party challenged the decision before the Election Commission of Pakistan (ECP) and demanded a recounting of votes as well as thumb verification.
The ECP dismissed the MQM’s plea and, in a short order, asked Tessori to approach an election tribunal to seek relief regarding his petition.
Ghani, on the other hand, claimed that the PS-114 by-polls were one of the most transparent elections in Karachi’s history.
MQM won the seat in the 1990, 1993 and 2008 general elections but the party’s Rauf Siddiqi lost it to Irfanullah Marwat in 2013, who contested the polls on a multi-party National Alliance seat.
Marwat’s victory, however, was declared void by an election tribunal in July 2014, and the Supreme Court in May 2017 dismissed his appeal challenging the tribunal’s decision, thus paving the way for the recent by-election.