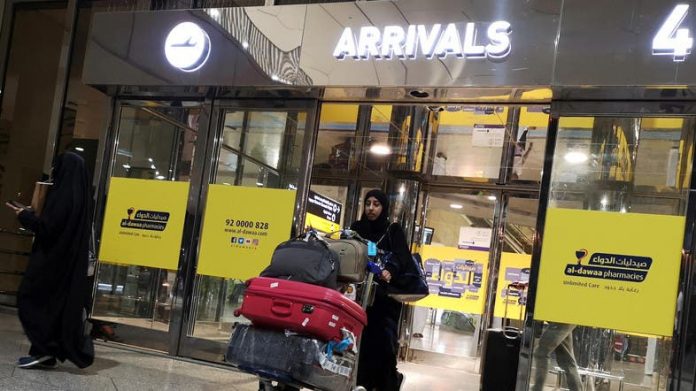 RIYADH: Saudi Arabia has extended flight and travel bans over coronavirus fears to include the European Union and 12 other countries after announcing 24 new cases overnight to bring its total to 45, state media reported on Thursday.
Citizens and residents in the affected jurisdictions have 72 hours to return to the kingdom, state news agency SPA said, citing an official source at the interior ministry.
Passenger traffic through all land crossings with Jordan was also suspended, while commercial and cargo traffic is still allowed.
The kingdom had already banned travel to some 19 countries, including neighbouring Arab states, and said it would impose a fine of up to 500,000 riyals ($133,000) on people who did not disclose health information and travel details at entry points.
Other preventive measures include locking down the oil-producing region of Qatif, where many of its cases are centred, suspending Umrah, closing schools and cinemas nationwide, cancelling conferences and sporting events, and postponing a G20 ministerial meeting scheduled for next week.
As well as the EU, the latest decision includes Switzerland, India, Pakistan, Sri Lanka, the Philippines, Sudan, Ethiopia, South Sudan, Eritrea, Kenya, Djibouti, and Somalia.
Millions of migrant workers in Saudi Arabia come from many of those countries.
The decision excludes health workers in the kingdom from the Philippines and India as well as evacuation, shipping and trade trips involving necessary precautions, the SPA report said.