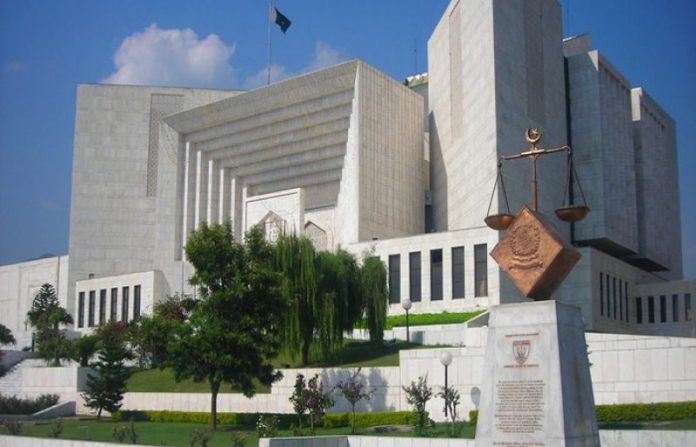 ISLAMABAD: The Supreme Court has thrown away the ruling of the Punjab Deputy Speaker Dost Muhammad Mazari for rejection of 10 votes of PML-N giving the lead to Hamza Shahbaz in the Punjab chief minister run-off election.

The three-member bench of the apex court said that the deputy speaker’s ruling was in violation of the order in the case pertaining to the interpretation of Article 63(A), declaring PTI-PML-Q joint candidate Pervaiz Elahi as the winner.

The short decision comprises of 11-pages ordered the governor Punjab to arrange for the oath of Pervaiz Elahi as Punjab CM and took his oath by11:30 pm. It added that if he refuses to perform his duties then President Arif Alvi will administer the oath. It also declared that any appointments made by Hamza Shahbaz are illegal.

The Supreme Court on Tuesday delayed announcement of the reserved the verdict on the petition of PTI-PML-Q against the ruling of the Punjab Assembly Deputy Speaker Dost Muhammad Mazari which led to victory of Hamza Shahbaz in the Punjab chief minister run-off election.

Hence, the final tally stood at 179 votes for Hamza and 176 votes for Elahi.

PTI-PML-Q coalition had challenged the ruling in the Supreme Court.

As the hearing resume at 2:30 pm, the PTI lawyer Ali Zafar said that the matter of election of Punjab CM was under discussion for last three months and all PML-Q lawmakers knew who they had to vote for.

He urged the court to examine all record before the run-off election. Zafar said that the party head resides all powers within the party and said those powers must not be curtailed.

The chief justice said that other respondents also cited different court verdicts in their arguments.

He added that Punjab Advocate General also tried interpreting Article 63(A) however it was not required as the court had already settled the issue.

PTI’s lawyer claimed that the lawyers of the chief minister and deputy speaker could not answer the court’s questions on merit. The chief justice said that the order of holding run-off elections for Punjab CM after the by-elections in Punjab was given after consensus of all parties.

Justice Ahsan asked how many dissidents took part in the by-polls. PML-Q’s lawyer said that 17 of 18 dissidents who contested the by-polls faced defeat.

The chief justice remarked that the even in yesterday’s hearing, the decision of the Supreme Court was referred however asked under which law the orders of the election commission were binding on the top court.

PTI’s lawyer Ali Zafar reiterated that the ruling of the deputy speaker was not even in accordance with the verdict of the election commission.

He added that the court had settled the method for directions of the party head in Ayesha Gulalai case.

The chief justice asked if it is written in the aforementioned case that who would give directions. Zafar said that it was ordered that the party head of his nominate representative could dispatch a reference for ineligibility of a party member.

The Supreme Court of Pakistan resumed on Tuesday hearing of the petitions regarding the ruling of the Punjab Deputy Speaker Dost Muhammad Mazari.

Irfan Qadir, who is representing Mazari, appeared before the three-member bench headed by Chief Justice Umar Ata Bandial and told the court that he has instructions from his client to not become part of the proceedings.

People are boycotting the court proceedings in the country, Qadir said.

Qadir said that they would file a review petition for the formation of the full-court bench.

This comes after the apex court on Monday rejected multiple petitions requesting the formation of a full court bench on the issue of Punjab chief minister election and the ruling of Punjab Deputy Speaker .

Farooq H Naik said they would also be boycotting the proceedings. “But you are not even party to the cases,” the chief justice said to Naik.

The original question was who can give directions to the members, CJ Bandial asked.

It’s clear from the reading of the constitution that it is the parliamentary party that has to give instructions, the chief justice said, adding that there’s no need for any further legal reasoning on this point.

It’s not such a question on which a full-court bench should be formed, CJ Bandial said.

While interpreting the Article 63-A, the question was about what would happen in case of dissent not who can give instructions, he said.

Another solution is that we separate from the bench, the chief justice said.

Formation of full court was nothing more than dragging the case, he said.