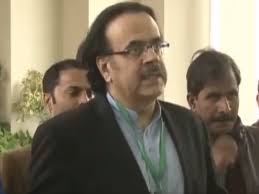 ISLAMABAD: The Chief Justice of Pakistan Justice Saqib Nisar has rejected anchor Shahid Masood’s response, observing that there will be punishment according to law now.
Hearing case Hearing case regarding startling revelations made by Shahid Masood, 3-member bench headed by Chief Justice of Pakistan Justice Saqib Nisar said that the time to apologize and retract claims has passed, hence there will be legal consequences now.
The anchorperson had claimed during a late night show that Zainab s suspected rapist and murderer was a member of a pornography gang, which also includes a Punjab minister. During another hearing of the case, Masood had also told the court that the suspect has 37 foreign accounts.
Previously, when Shahid Masood asked to apologize and withdraw case, CJP said that the matter would not end with an apology as the applicant made the claims on national TV and asked the court to take notice, prescribing for himself the punishment of death if claims proven false.