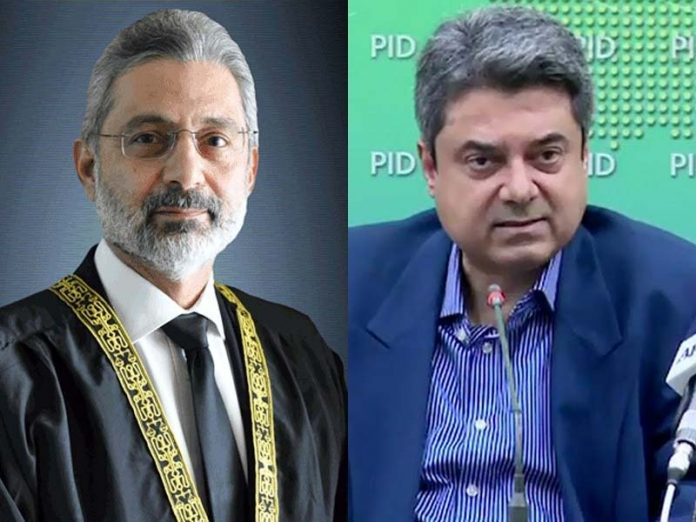 ISLAMABAD: Supreme Court (SC) on Tuesday has conducted a hearing on Justice Qazi Faez Isa’s petition in which he maintained that the presidential reference against him is based on malafide intent.
During the proceedings headed by Justice Umar Ata Bandial, Justice Isa’s lawyer Munir A Malik raised objection over law minister Farogh Naseem for representing the government side in the case.
The judge warned Munir A Malik of announcing the verdict if he won’t withdraw his objection. Don’t dig yourself into small things, Justice Umar advised the counsel.
Barrister Farogh Naseem had resigned as the federal minister for law to represent the federation in the Justice Qazi Faez Isa case.
Prime Minister Imran Khan has accepted the resignation. I have resigned on the direction of the premier who will keep the portfolio till the case continues, Farogh Naseem said.
“I respect judiciary and judges very much and have no personal grudge against any lawyer, bar council and justice including Qazi Faez Isa. I always made decisions in light of the Holy Quran, Hadith and constitution as law minister,” he added.
In a new written response submitted by Justice Qazi Faez Isa with the Supreme Court of Pakistan (SCP) in the presidential reference filed against him, the judge has accused Prime Minister Imran Khan and several other politicians of possessing offshore companies.
The 116-page response submitted with the apex court by advocate Munir A Malik on behalf of his client, pointed out that several personalities had concealed their assets abroad through offshore companies, and PM Imran was prominent amongst them.
Justice Isa maintained that his wife and children had never concealed any assets abroad using offshore companies, and the properties they own were bought in their own names.