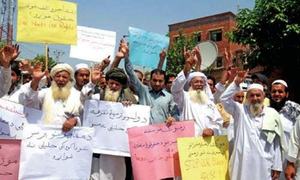 PESHAWAR: Scores of Pashtun Tahaffuz Movement (PTM) supporters held a demonstration in Peshawar on Saturday to protest against the registration of cases against PTM leaders by the Balochistan government earlier this week.
On Tuesday, Killa Saifullah police had registered an FIR against PTM leaders including Manzoor Pashteen, Haji Hidayatullah, Ali Wazir, Khan Zaman Kakar and others, as they were reportedly protesting against enforced disappearances, extrajudicial arrests and killings, as well as the alleged mistreatment of the Pakhtun community by law enforcement agencies.
The protesters, belonging to PTM’s Khyber Paktunkhwa chapter, chanted slogans against the federal and Balochistan government, and demanded of the government to withdraw the FIR filed against the movement’s leaders.
“They were demanding their basic rights,” a protester said, adding that instead of giving them assurances the Balochistan government went on to register an FIR against PTM leaders.
The protester said action against the “peaceful protesters” was “injustice and an attempt to drown the Pashtun voices raised for the provision of basic rights to the community”.