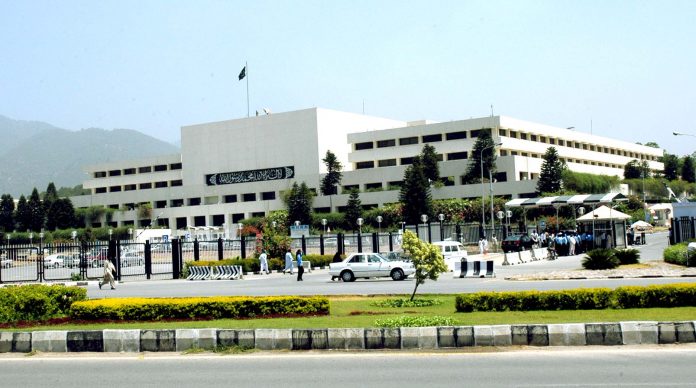 ISLAMABAD: The Defence Committee of the National Assembly and Senate approved the Army Act Amendment Bill here on Friday.
Members of both standing committees were present in the session including Defence Minister Pervez Khattak, Federal Minister for Law and Justice Farogh Naseem, Senator Mushahid Hussain Syed, Senator Sherry Rehman and others.
Speaking to media persons, Azam Swati said none of the opposition members raised objections and presented amendments on the bill. He added all the political parties approved the bill unanimously.
Federal Law Minister Farogh Naseem said, “I thank the opposition parties and government allies for showing unity on passing the bill.”
The government tabled on Friday the bill to amend the Pakistan Army Act and the Constitution in order to give a three-year extension to Chief of the Army Staff (COAS) General Qamar Javed Bajwa.
National Assembly Speaker Asad Qaiser chaired the session. The bill was tabled by Defense Minister Pervez Khattak in the Parliament.
Khattak also presented the Pakistan Navy (Amendment Act) and the Pakistan Air Force (Amendment Act), separately. The NA session was adjourned till Saturday, local media reported.
The Army Act Amendment Bill, approved by the federal cabinet, will extend the retirement age of chief of army staff, chief of air staff, chief of naval staff and the chairman of the joint chief of staff committee to 64 years.
According to clause 8B of Pakistan Army (Amendment) Bill, 2020, “The President, on the advice of the Prime Minister, may reappoint the Chief of the Army Staff for additional tenure of three (03) years, or extend the tenure(s) of the Chief of the Army Staff up to three (3) years, on such terms and conditions, as may be determined by the President on the advice of the Prime Minister, in the national security interest or exigencies, from time to time.”
On Thursday, opposition parties Pakistan Peoples Party and Pakistan Muslim League – Nawaz lend their support to the government over the Army Act. All parties and stakeholders were on the same page regarding the passage of the bill, Law Minister Farogh Naseem said.