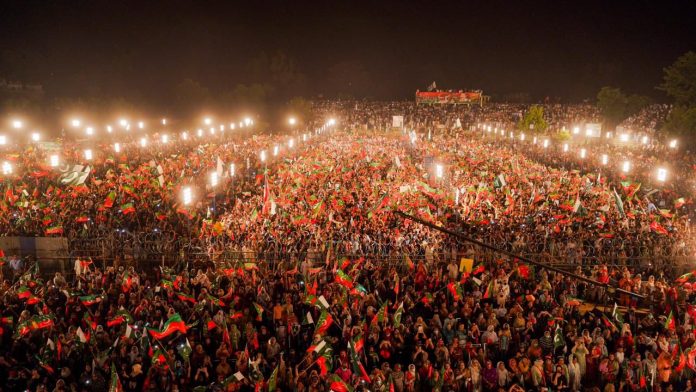 He backed to what he knows best’ — street politics, after his ouster from prime minister office in a no confidence motion, which he believes were hatched and perpetuated by US government to bring him down displeasure over his foreign policy choices, which often favour China and Russia.

Since his ouster, Imran Khan is in the streets and holding massive rally every day in a bid to strengthen his stance and mibilise the public and workers for the party’s upcoming proposed long march.

Imran Khan started his ‘freedom struggle’ from Peshawar, where his party is ruling the province since 2013 followed by Karachi and Lahore. His fifth jalsa in Khyber Pakhtunkhwa since his ouster will be held in Kohat today. Imran Kha, so far, had held huge rallies in Peshawar, Abbottabad, Mardan, and Swabi, attended by thousands enthusiastic workers.

The PTI Chairman has held a series of ‘jalsas’ in different cities of the other provinces too, including Karachi, Mianwali, Lahore, Sialkot, Attock, and Faisalabad, as he rallies his party workers and leaders against the government ahead of the proposed march to Islamabad.

In his addresses to Swabi and Mardan jalsa, Khan warned that if a date for the general elections is not announced, the “sea of people” he is calling to Islamabad for a “revolution”, would sweep everyone away.