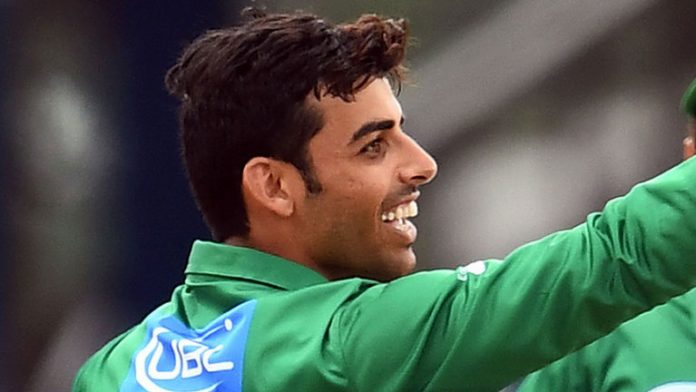 LAHORE: Shadab Khan has been fined 20 per cent of his match fee and received one demerit point.
The player was found guilty of a Level 1 breach of the ICC Code of Conduct for Players and Player Support Personnel during Monday’s Twenty20 International against the Windies in Karachi.
The Pakistan wrist spinner was found to have violated Article 2.1.7 of the code, which relates to “using language, actions or gestures which disparage or which could provoke an aggressive reaction from a batsman upon his/her dismissal during an international match”.
In addition to the fine for his breach, one demerit point has been added to Shadab’s disciplinary record.
The incident happened in the ninth over of the Windies’ innings when Shadab, after dismissing Chadwick Walton, pointed his finger at the departing batsmen and also made an inappropriate comment.
After the match, Shadab admitted the offence and accepted the sanction proposed by David Boon of the Emirates Elite Panel of ICC Match Referees and, as such, there was no need for a formal hearing.
The charge was levelled by on-field umpires Shozab Raza and Ahmed Shahab, third umpire Ahsan Raza, as well as fourth umpire Khalid Mahmood.
Level 1 breaches carry a minimum penalty of an official reprimand, a maximum penalty of 50 per cent of a player’s match fee, and one or two demerit points.