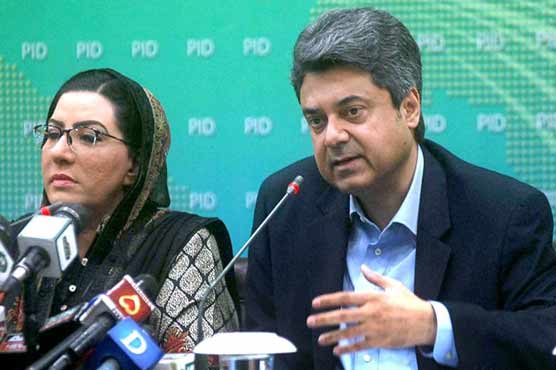 ISLAMABAD: Federal Minister for Law Barrister Farogh Naseem on Tuesday said that former prime minister and Pakistan Muslim League-Nawaz (PML-N) supremo Nawaz Sharif’s sentence has only been suspended.
Addressing a press conference along with Special Assistant to the Prime Minister on Information and Broadcasting Dr Firdous Ashiq Awan after federal cabinet meeting in Islamabad on Tuesday, he said that asking for indemnity bonds from the former prime minister was cabinet’s decision, adding that the cabinet allowed Nawaz Sharif to travel abroad for four weeks.
The minister said that Leader of Opposition and PML-N President Shehbaz Sharif accepted giving undertaking instead of indemnity bonds.
“Prime Minister Imran Khan had given me task of Criminal Justice System and work is underway for its betterment,” he said.
Farogh Naseem said that the indemnity bond wasn’t a surety bond, adding that the PML-N president’s lawyers were asked to submit indemnity bond or affidavit.
“Shehbaz Sharif could face contempt of court if PML-N supremo Nawaz Sharif didn’t return,” he added.
Speaking on the occasion, Dr Firdous Ashiq Awan said that Prime Minister Imran Khan while chairing the federal cabinet meeting expressed the determination to pass on the fruits of improving economy to the people.
She said that the prime minister updated the cabinet on improving economic indicators of the country.
Congratulating the government1’s economic team on these achievements, he said for the first time current account deficit has decreased in the country due to measures taken by the government’s economic team. He said improvement of economic indicators has restored the confidence of local and foreign investors.
The prime minister directed all ministries and departments to accelerate efforts in implementation of people friendly policies of the government. Imran Khan directed that each ministry should assess its performance on monthly basis regarding providing relief to people.
The cabinet discussed the importance of alternative energy in the overall energy mix and how to increase its share. It approved the new renewable energy policy in principle.
The special assistant said that the cabinet endorsed the decisions of Economic Coordination Committee s last meeting. It also formally approved the decisions made in JCC meeting between Pakistan and China.
The cabinet also gave approval to National Tariff Policy. The cabinet discussed the issue of appointments at 134 vacant senior posts in various ministries and departments. The forum was apprised that on 89 positions, people are working on additional charge.