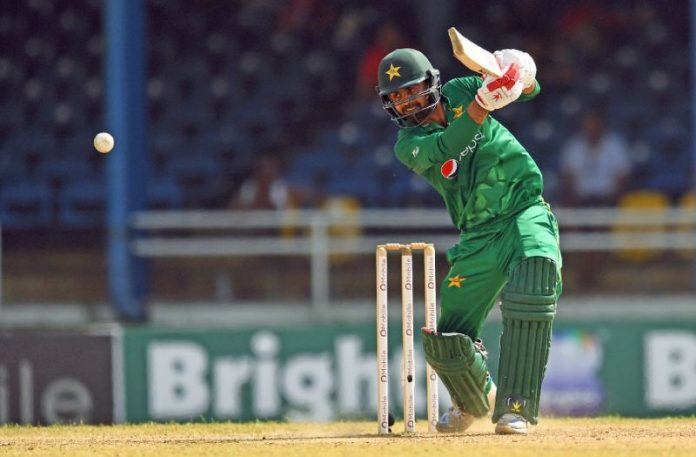 PORT OF SPAIN: Ahmed Shehzad made a welcome return to form in guiding Pakistan to a series-clinching seven-wicket victory over the West Indies in the fourth and final match of their T20 International series at the Queen s Park Oval on Sunday.
Facing a modest target of 125, the opener stroked his way to 53, ensuring there were to be no alarms as the visitors rebounded from a heavy defeat suffered the day before which gave the West Indies hope of squaring the series.
Shehzad put on 70 for the second wicket with Babar Azam (38) to eliminate any prospect of the home side pulling off the upset. However both fell to the pace of Kesrick Williams with victory in sight and it was left to the experienced pair of Shoaib Malik and skipper Sarfraz Ahmed to formalise the result with an over to spare.
Excellent seam bowling by Pakistan limited the West Indies to 124 for eight batting first and set the stage for the batsmen s romp to victory to complete a 3-1 series triumph and claim a potentially significant psychological advantage ahead of the three-match one-day international series in Guyana starting on Friday.
Hasan Ali and Rumman Raees, replacing fellow left-arm seamer Sohail Tanvir from the previous match, displayed admirable accuracy and discipline, combining for three important wickets and also delivering three maiden overs.
It is the first time ever that Pakistan managed to bowl as many as three maidens in a T20 international and also the first occasion the West Indies, the reigning World T20 champions, conceded three maidens when batting in the game s shortest format.
Despite struggling to cope with the intense early afternoon heat, Ali returned the outstanding figures of two for 12 from his four overs, including two maidens. He breached the defences of Marlon Samuels and Jason Mohammed to leave the home side s innings in ruins after they had started brightly.
“I made a greater effort to bowl wicket-to-wicket and got the results this time,” said Ali after receiving the man of the match award. “There was also a bit of reverse swing and that helped me as well.”
Leg-spinner Shadab Khan, who suffered alongside the other bowlers as opener Evin Lewis blazed 91 in pacing the home side to a seven-wicket win in the third match to keep the series alive, also responded superbly in this critical final match.
He claimed two for 16 off his four overs, including opener Chadwick Walton for a top score of 40 after Imad Wasim had earlier accounted for Lewis for just seven. Khan finished with 10 wickets in the series and earned the man of the series award.
“Yesterday I bowled a bit too quickly,” he explained after collecting his award. “The coach (Mickey Arthur) advised me to slow it down a bit today and it got the results.”
With his side tottering at 83 for seven, captain Carlos Brathwaite effected a bit of a repair job with an unbeaten 37, although the inadequacy of that final total was put into context by Pakistan s response.
“We just batted poorly and once again our middle-order failed us,” said the disconsolate skipper. “We keep talking about doing the right things and having the right attitude but we need to get the results that are deserving of a greater effort.” …Agencies