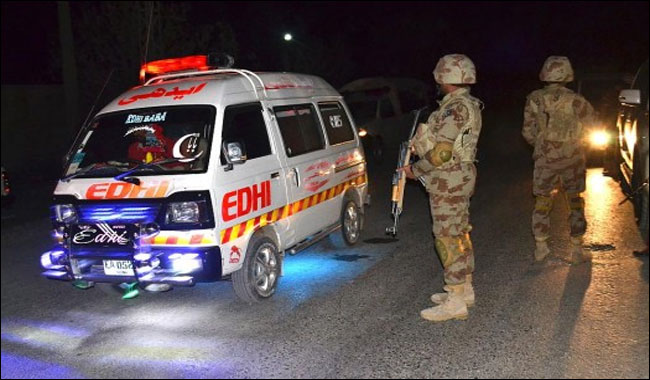 QUETTA: At least five people including four security personnel were martyred and 25 others people including police officials sustained injuries in a suicide blast that ripped through Quetta’s Zarghoon Road near Balochistan Assembly here Tuesday.
The suicide bomber riding on the motorcycle hit the FC truck parked near GPO Chowk in the vicinity of the Balochistan Assembly.
Police and rescue sources have confirmed the explosion was a suicide attack. The injured and dead have been shifted to the Civil Hospital Quetta.
Police and FC personnel have cordoned off the area following the explosion. Emergency has been declared in the hospitals of Quetta.
The death toll is expected to rise as condition of several injured persons is said to be critical. The local authorities have also declared emergency at hospitals across the city.
More than six thousand security personnel were deployed in Quetta’s Red Zone area as the provincial lawmakers were expected to submit a no-confidence motion against Balochistan Chief Minister Sanaullah Zehri today.
Later, the provincial assembly session was adjourned after Sanaullah Zehri decided to step down on the advice of Prime Minister Shahid Khaqan Abbasi.