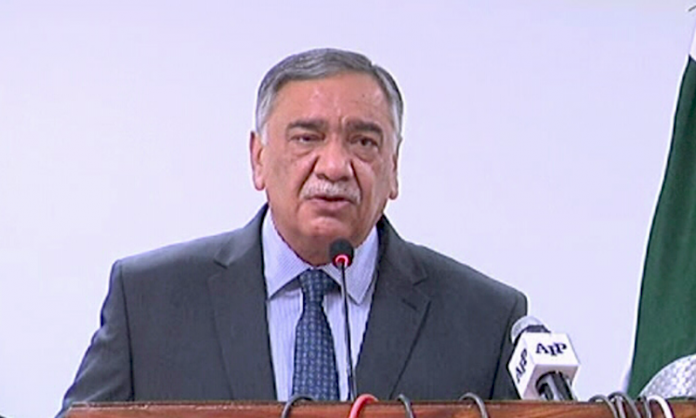 ISLAMABAD: Outgoing Chief Justice of Pakistan Justice Asif Saeed Khosa on Friday said that a campaign seems to have been launched to defame him and the institution of judiciary.
The Chief Justice made the remarks ahead of his farewell speech as chief justice during a full court reference.
He also clarified news reports attributed to him regarding the special court’s verdict in the high treason case against Gen (retd) Pervez Msharraf.
A special court, formed under the orders of the Supreme Court, had awarded a death penalty to Musharraf for high treason. Soon after Tuesday’s short order was issued, news channels had reported that Justice Khosa had spoken about the verdict.
Justice Khosa noted that he was accused of supporting the Musharraf verdict in a meeting with journalists when he had never done so.
“The truth will prevail,” he said in comments released to media before his speech to the full court.
In his speech during the reference, the CJP said he always did what he thought was right and was worth doing and it did not matter to him as to what the reaction or consequences would or could be.
“I believe that a judge, besides being just and fair to all, should have a heart of a lion, nerves of steel, wisdom of a sage, expression of a man of letters and approach full of empathy and compassion. These were the ideals that I strived to follow but I do not know how successfully,” he said.
“I can, however, confidently say, and Allah Almighty be my witness for it, that I always tried to be true to the oath of my office. I gave my hundred percent to the job, tried to perform beyond the call of duty, never raised my voice, spoke mainly through my pen, never delayed a judgment unduly and after giving the best years of my life to this public service I lay down my robes today with a conscience which is clear as crystal.
“I, however, in all humility at my command, seek forgiveness from all those in whose cases my judgment might have gone wrong unwittingly and also from those whose feelings I might have hurt unintentionally,” he concluded.