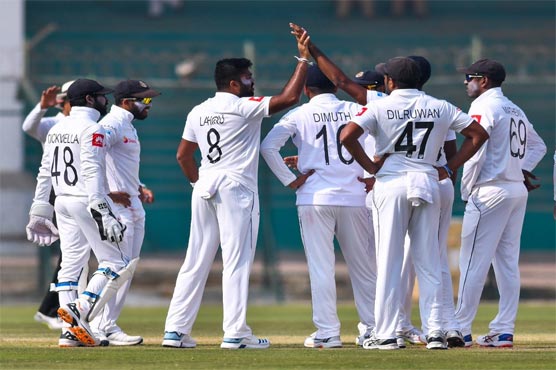 KARACHI: Sri Lanka’s pace and spin attack restricted Pakistan to 191 on the first day after dismissing the dangerous Babar Azam on the opening day of the second Test in Karachi.
Azam was well set after scoring his 13th half-century before left-arm spinner Lasith Embuldeniya had him stumped off a well-disguised delivery for 60.
Ebbuldeniya then removed Haris Sohail leg-before for nine at the stroke of tea to further hit Pakistan, who will now look to experienced batsman Asad Shafiq, unbeaten on 49, to better the score.
Mohammad Rizwan was the other batsman, on four.
Earlier, Sri Lanka left-arm pacer Vishwa Fernando dismissed opener Shan Masood for five and skipper Azhar Ali for a duck to rattle Pakistan, who won the toss on a greenish-brown National Stadium pitch.
Fernando’s new-ball partner Lahiru Kumara dismissed first Test centurion Abid Ali for 38 to end a third-wicket partnership of 55, which had lifted Pakistan from a precarious 10 for two.
Fernando thought he had Azam leg-before on four, but TV referalls showed the ball hit the bat first.
Azam reached his fourth half-century in the last five innings with a crisp boundary to cover off-spinner Dilruwan Perera, but could not match his hundred in the first Test.
Azam’s 96-ball knock contained eight boundaries and a six.
Fernando was the thorn in the side of Pakistan in the first session.
He angled one in to Masood to hit his off stump before clean bowling skipper Azhar with a full-length delivery.
That left Azhar without a fifty in 13 innings, including nine scores of under 10.
Pakistan had won the toss and decided to bat against Sri Lanka. Both teams made one change apiece due to illness and injury. Pakistan’s Usman Shinwari – ruled out with typhoid – has been replaced by Yasir Shah and Lasith Embuldeniya is in Sri Lanka’s squad for injured Kasun Rajitha.
Fawad Alam – who was selected in Pakistan Test team after ten years – once again failed to make into the playing XI. Pakistan won four out of last five encounters against the Islanders in Karachi as one match ended in a draw.
It is pertinent here to mention that the rain-ravaged first Test in Rawalpindi (December 11-15) ended in a tame draw after almost three days were lost.
Squads
Pakistan: Shan Masood, Abid Ali, Azhar Ali (capt), Babar Azam, Haris Sohail, Asad Shafiq, Mohammad Rizwan (wk), Yasir Shah, Mohammad Abbas, Naseem Shah, Shaheen Afridi
Sri Lanka: Dimuth Karunaratne (capt), Oshada Fernando, Kusal Mendis, Angelo Mathews, Dinesh Chandimal, Dhananjaya de Silva, Niroshan Dickwella (wk), Dilruwan Perera, Lasith Embuldeniya, Vishwa Fernando, Lahiru Kumara.