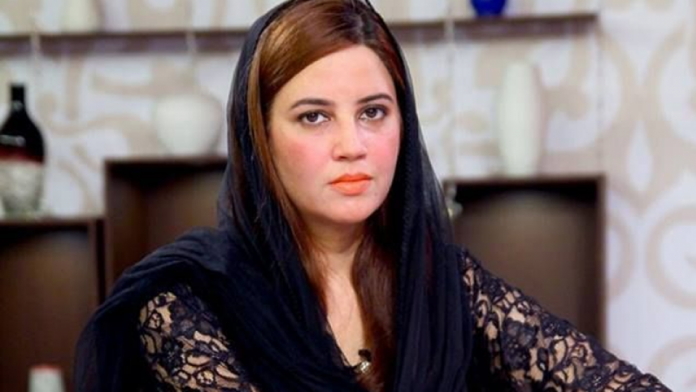 ISLAMABAD: Federal Minister of Climate Change Zartaj Gul Wazir wrote a letter to appoint her sister Shabnam Gul as the new director of the National Counter Terrorism Authority (NACTA) for three years on Saturday.
Shabnam was working as an assistant professor at the Lahore College for Women University and sent to NACTA as a Grade-19 officer on deputation.
Emergency NACTA committee was also requested to propose Shabnam Gul as the new director. Zartaj Gul called Interior Secretary Azam Suleman Khan for her sister appointment whereas she also wrote him a letter afterwards. 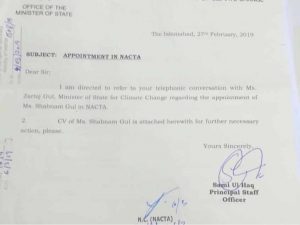 The official copy of the letter written by the Principal Staff Officer Sami-ul-Haq stated that he was directed to refer the telephonic conversation Zartaj Gul made to Azam Suleman regarding her sister appointment in NACTA.
After Interior Secretary received the letter on Feb 27, NACTA was ordered to follow rules and policies according to the law. State Minister for Climate informed that her sister has a PhD in terrorism so she should be considered for the post. 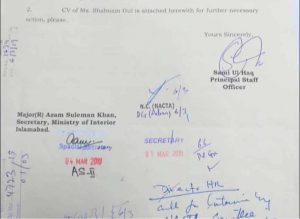 Ministry of Interior expressed that it was the duty of NACTA to verify her PhD. They just handed her over to Ministry of Interior to gain the government loyalty.
Shabnam Gul took admission in a university to pursue PhD in the Political Science and even after nine years she has not yet completed her degree. Zartaj Gul sent Shabnam’s clearance from Lahore College for Women University to Prime Minister on the pertaining matter.
PM Imran was told in the text message that terrorism is Shabnam’s subject so she should be appointed as NACTA director under the law and policy whereas Shabnam Gul refused to comment on the matter.
Ministry of Interior stated that 12 federal and provincial officers applied for the post which included BS-17 to BS-19 grade officers.
According to NACTA spokesperson, a 3-member committee was formed for the suitable selection of NACTA director’s post. Committee conducted interview on May 14 for the posts of assistant director, deputy director and director. Committee further sent a list of selected six names to Establishment Division. Shabnam Gul was added among the other candidates in the list.
As per spokesperson, Shabnam was selected on the merit as she had a PhD in terrorism and written many articles on extremism and terrorism. “Shabnam Gul was one of the selected candidates. The committee recommended her purely on merit for posting against one of the vacant posts of directors as she is already working in BS-19,” he clarified.
She was found suitable for NACTA Research Wing and Establishment Division deployed her on May 22.
A country wide criticism took place on social media questioning her deputation on which Minister for Science and Technology Fawad Chaudhry tweeted, “Shabnam Gul has “PhD in terrorism and FATA, and selected after interviews, as far my job as Minister of Science and Technology is concerned, I am a politician and ministries are held by politicians not technos, shows your little insight into the democratic system”.