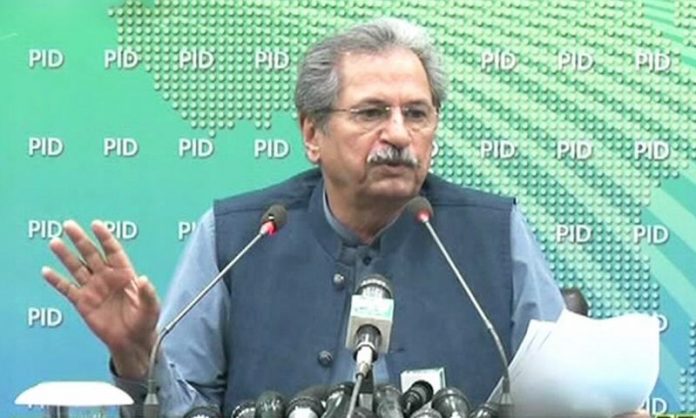 ISLAMABAD: Federal Minister for Education Shafqat Mahmood on Thursday said that the students who had not given exams of 9th and 11th classes have been promoted to next classes.
Addressing a press conference in Islamabad on Thursday, he said that they include regular as well as private students. They will not need to give composite exam next year; rather they will give one year exam. The marks of their previous class will be awarded based on their performance in next class.
The minister said that only those students will be promoted whose performance in previous exams will be satisfactory, adding that a three percent increase has been made in previous results of those students based on statistical formulas.
Shafqat Mahmood said a student who fails in 40 percent subjects will be given passing marks.
He said special exams will be conducted for the students who were trying to improve the results of their class 11th, adding that same will be applicable for students giving composite exams, or students preparing for some subjects.
“The result will be calculated on cumulative basis and not subject wise,” he said.
The minister went on to say that the students desirous to participate in special exams should indicate to their respective boards by first of July this year. The examination could be held anywhere between September to November this year.
“All decisions relating to education sector under COVID-19 situation have been made with consensus of all boards,” he added.
To a question, Shafqat Mahmood said over 200 universities exist in Pakistan that are largely independent in decision making in their matters.